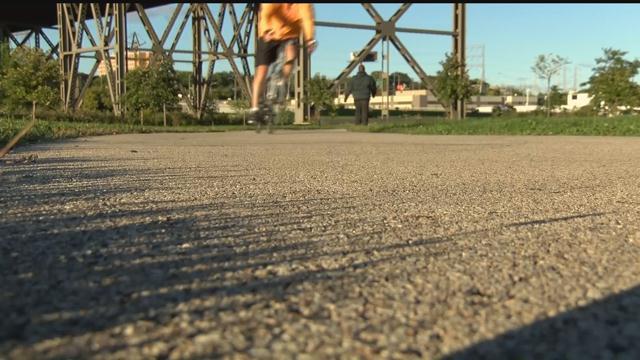 A woman says she was sexually assaulted on the Hank Aaron Trail and Milwaukee police are still trying to find the suspect.

"That is really shocking. I come on the trail almost every day and I've never seen anything that would make me think that would be possible here," said Marc Gorelick.

"That's why I choose this path sometimes, because its less crowded," she said.

Both are surprised about what happened here. Milwaukee Police say just after 6:30 Tuesday night a 27 year old woman was sexually assaulted.

That woman was running along the Hank Aaron State Trail when a man rode up behind her on a bike and grabbed her.
Police say the man fondled her and rode off when she started to scream.

The runners we spoke with admit; though they feel safe here, it could happen to anyone.

"Do you carry protection with you?"

"No I don't at all. I carry my phone, headphones and ID and that's it," said Shaah.

"I carry about the phone in case I get hurt, I don't think about it in terms of safety," said Gorelick.

But Jeff Winzenried with Monkey Bar Gym says you can and should fight back.

"If someone is coming from behind and bear hugging you, scream and turn and yell as loud as you can and scratch them! You want that DNA under your fingernails. Make blows that are going to make an impact to the eyes, the throat, the groin as quick and hard as possible. This is your life your dealing with," said Winzenried.

Police are still searching for the suspect described as a Hispanic male between the ages of 17-18 years old, with a slim build and long ponytail. He was riding a black, low-rider style bike. If you have more information, call Milwaukee Police.

The runners will keep using the trail but say this attack will make them more aware.

If you're interested in participating in one of Monkey Bar Gym's self defense classes, including one called "Vicious," we have details here: http://www.monkeybargymmilwaukee.com/