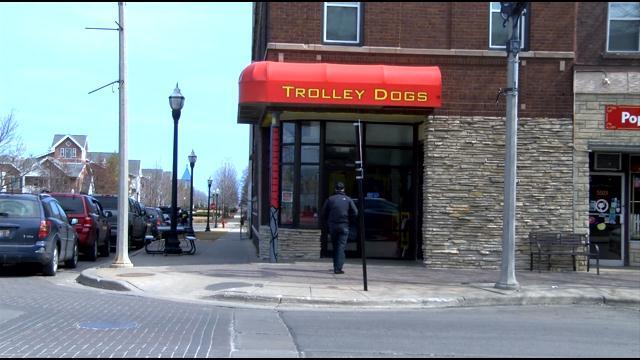 A Kenosha man says his hot dog restaurant has been a success but the relationship with the woman who owns the building next to his threatens to shut it all down.

Trolley Dogs is a popular restaurant that's been in downtown Kenosha for nearly twelve years. But thanks to some problems with a local building owner, they say they're facing an uphill battle.

Joe Catuara admits he knew nothing about building so when he and his brother decided to turn this building into a restaurant, they made sure everything was ok with the city, including where they put their exhaust vent.

\" I didn't put it in myself. We used professionals, we used city services,\" said Catuara.

For years, they had lines out the door and no problems, but now, the woman who owns the building next door says the vent has to go, that it is a nuisance, and she sued Catuara to get it moved.

This is the vent that's causing all the problems. The person who filed the lawsuit says her tenants smell grease all the time and that it's a nuisance. But those we spoke with say they disagree.

\"I smell the aroma outside all the time and I'm like...oh my god..I wanna go eat,\" said one woman who lives within walking distance of the restaurant.

\"If you didn't like it, maybe you should move. It was there already,\" said another.

We reached out to the woman who filed the lawsuit but she didn't respond as of news time. And when we walked back to where the vent is we noticed tenants in her building who live right next to the vent actually had their windows open. Also we want to point out, the business that occupies the space next door to Trolley Dogs has a good relationship with the restaurant and is not the person seeking legal action against them.

Catuara says the smell is part of city life.

He lost the lawsuit and has until June 30th to move the vent.

\"I asked for some guidance from the judge on where to put it so it wouldn't be another issue and he suggested I go to the same places I went to in the first place,\" said Catuara.

It's something he plans on doing, but we wants to make sure he does it in a way that it won't have to be fixed again at a later time. And,it 's something that will cost him nearly 10 thousand dollars, money he doesn't have.

\"We had the resources to get this right from the beginning. But now, I'm not sure I could even get a loan,\" he said.

If you'd like to help out Trolley Dogs, they've got a GoFundMe account set up, linked here on our page.