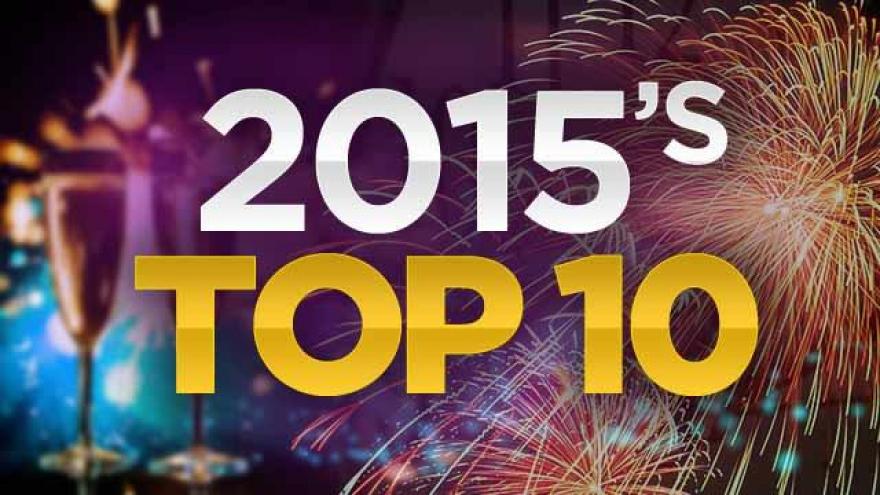 CBS 58 worked on over 100,000 stories throughout the course of 2015. It takes something special for a story to rise above thousands of others and make the Top Ten list. Some of the Top Ten stories shed a light on a very violent year in Milwaukee, others show kindness and love through southeast Wisconsin and others were just so wacky we loved them. Enjoy!

This is not a list of the favorite stories of our newsroom, or a few arbitrary stories. This list is based on actual page views each story received on CBS58.com. These are the stories that our viewers found the most meaningful, newsy, or wacky and found worthy of a click.

Thanks for clicking on CBS58.com!

In July when the homicide rate in Milwaukee stood at 84, a reporter from CBS News told the story of a city dealing with a brutal wave of violence. Residents of Milwaukee told their stories of hearing gun shots every day.

As of December 30, Milwaukee's homicide rate stands at 145. According to District Attorney John Chisholm, about 65 percent of them are unsolved.

Although technically the event happened at the end of December in 2014, it was the funeral for baby Bill Thao that gained the attention of southeast Wisconsin. 1-Year-Old Bill Thao was shot December 27 after dozens of bullets were fired into the families home, one striking Thao in the lower back.

In the end, it was discovered that Damarquae Cohill mistakenly shot the wrong house killing Bill Thao. In December, Cohill was found guilty of reckless homicide.

8. Two Arrested After Fight Over Confederate Flag in Racine

In August, a man was walking down the street in Racine when he spotted a confederate flag hanging in a window. The man confronted the home owner who called the him the n-word. The two got into a fight and were both arrested and cited.

7. Two Shot and Killed after Car Strikes and Kills Two-Year-Old

In April, Milwaukee Police were called to the scene of a fatal accident and double shooting. Two-year-old, Damani Terry, wandered away from a party into the street where he was struck and killed by a van. The driver of the van stayed on scene and was later shot and killed by someone at the party. The brother of the two-year-old was also struck and later died.

UPDATE: Victims identified after two are shot and killed following...

Ricky Ricardo Chiles was later identified as the shooter. After a standoff with police in Chicago, Chiles committed suicide.

In June, a Hartford family took a Superhero themed photo shoot on train tracks. At first, the family was praised for the creativity of the photos, but then they became the target of internet attacks. In Wisconsin it is illegal to walk along or near train tracks unless authorized to do so.

In October, a gun store was found liable and negligent in the shooting of two Milwaukee Police Officers. The jury awarded the officers a combined $5 million. The outcome sets a president for other gun stores to be held accountable for straw purchases that happen at their stories.

The first truly lighthearted story on the Top Ten. At the beginning of December, Aaron Rodgers filmed trick shots with the guys of Dude Perfect. The video was released a few weeks later and shows Rodgers hitting a target on top of someone's head and throwing a football into a basketball hoop being driven on a golf cart.

Bud Caldwell, was married for over 50 years to his wife when she passed away. Since her death, Caldwell drives drives to Lakeside Park in Fond du Lac, rain or shine, and visits the bench he bought and dedicated to Betty. During the January snows at the beginning of January 2015 Caldwell couldn't walk to the bench so he sat in his car to visit. That is until two park workers cleared a path for Bud.

Karis Anne Ross committed suicide in 2014 leaving a note saying she was bullied for ten years while teaching at German Immersion School. Family and friends said she voiced her concerns to the school's principal, but they went ignored.

In July, multiple reports streamed into Milwaukee Police of a mountain lion roaming the streets of Milwaukee. Cell phone video taken in the Brewers Hill neighborhood appeared to show the wild cat in a backyard.

The 'Milwaukee Lion' was never found.

With over 300,000 views in just a few weeks, the strange story was the top story for 2015 on CBS58.com. An 82-year-old woman called Brown Deer Police because she heard her neighbors having loud sex shouting, "ISIS is good, ISIS is great".

CBS 58's story went viral garnering the attention of news sites such as the Huffington Post and Perez Hilton and gaining over 1,000 retweets on Twitter.

Police later released the audio of the 911 call to CBS 58. That audio can be heard here.