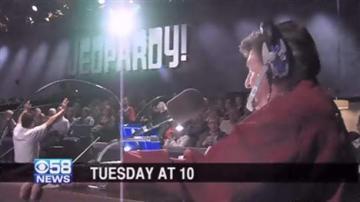 CULVER CITY, CA -- CBS 58 News ventures out to the Jeopardy Game Show set to show viewers all the stuff that never makes it on the television.

The visit happened during taping of the Battle of the Decades which features local champion Michael Falk of West Allis.

Show producers were strict and made our news crew sign a confidentiality contract, just like to the contestants, so as not to give away the results of shows that have yet to air.

\"I figured it would be a news junket situation,\" says CBS 58 News Anchor Michele McCormack, \"Similar to when a film is set for release, I assumed they would just line up all the local news crews and the people affiliated with the show pass by for quick interviews.\"

To the contrary, CBS 58 News was the only local news crews allowed to stay on the set all day. The only restriction being not taping the shows that will actually air.

\"I was left to my own devices to wander around,\" McCormack continued, \"I wanted the news viewers to see what I saw. I wanted them to get an idea of the well oiled machine that is Jeopardy and I found myself hanging back in darkened corners of the studio to see how the contestants really were with each other.\"

McCormack admits to feeling some intimidation approaching the head writer who comes up with the categories.

\"I think my interview with Billy Wise will surprise people,\" she says. \"Especially when he offers, without hesitation, his two biggest tips for landing on Jeopardy.\"

What were the biggest surprises of McCormack's visit?

\"How good looking announcer Johnny Gilbert is and how honest champion Ken Jennings was in giving me advice on how to get a good long interview with host Alex Trebek.\"

McCormack's special reports air Tuesday and Wednesday night on the CBS 58 News at 10.