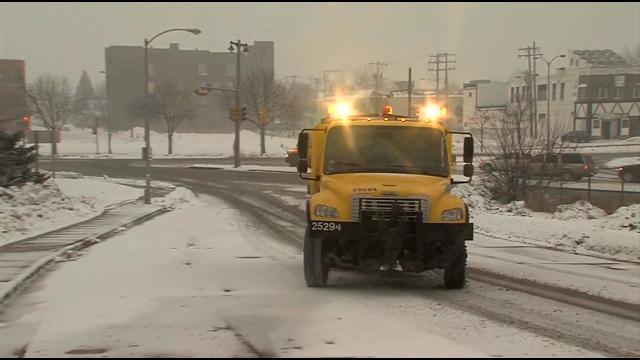 Drivers encountered slushy and slippery streets during their morning commute as another round of snow fell across the city of Milwaukee.

Snow began to fall shortly before 5 a.m. Tuesday, but Department of Public Works crews worked to get ahead of the winter storm by deploying 102 salt trucks at 11 p.m. Monday.

Officials said workers began by pre-treating side streets with salt, then moved to main roads. Once the snow started to fall and accumulate to an inch, plow blades hit the pavement to remove snow. But drivers couldn't tell as many of them were slipping and sliding around on streets.

City sanitation services manager, Wanda Booker, said the timing and pace of the snowfall complicated efforts. It takes a plow truck driver two hours to get through an entire route. Booker offered this explanation for the messy road conditions.

\"The truck had either not gotten there yet or had already cleared that area and based on how the snow was falling, it re-covered,\" she said. \"Just like you shovel your sidewalk and it's still snowing, by the time you get to the end of your drive it's covered again and you have to start all over.\"

DPW crews will spend the rest of the afternoon plowing and pushing snow to curbs on main roads so they're in good shape for the evening commute. Side streets will follow so everything is clear before re-freezing overnight.