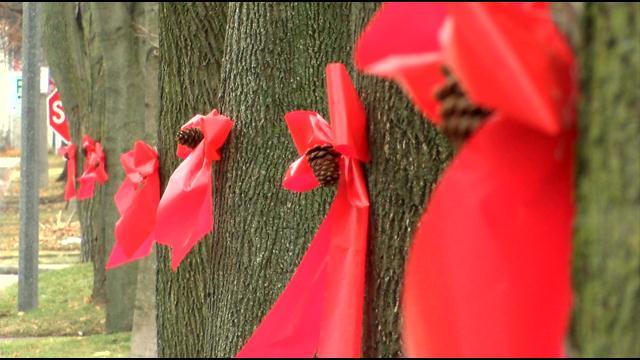 For several decades now, red ribbons have popped up along a one block stretch of 65th Street off of North Avenue in Wauwatosa.

Every tree in the quiet neighborhood is decorated with big bright red bows with pine cones in the middle.

\"Everybody loves to drive down and see the red ribbons,\" added Krista Hicks, whose husband goes all out with the home decorations. But it's the red ribbons that generate all the questions.  \"Everybody's wondering why they're up there, if there's a special reason.\"

Turns out this was started with red boy scout bows by a man who lived on the block several decades ago.

\"When we moved in 22 years ago it was a tradition already,\" said Michelle Bergevain who was asked by the man to continue putting the ribbons up around Christmas after he moved away.

\"He offered the job to my husband and I and we happily do it every year.\"

Over the years, they've had to repair and replace the decorations. They put them up in December and don't take them down until January when the block has what's called a \"round robin.\"

\"We have a few houses that volunteer,\" explained Krista Hicks. \"We go to each other's house for appetizers, entrees and deserts.\"

It harkens back to a time where everybody knew everybody on the block. Something theses residents would like to preserve for years to come.

\"I think it's a very special block,\" shared Bergevain.

A block where the ties that bind are red ribbons.