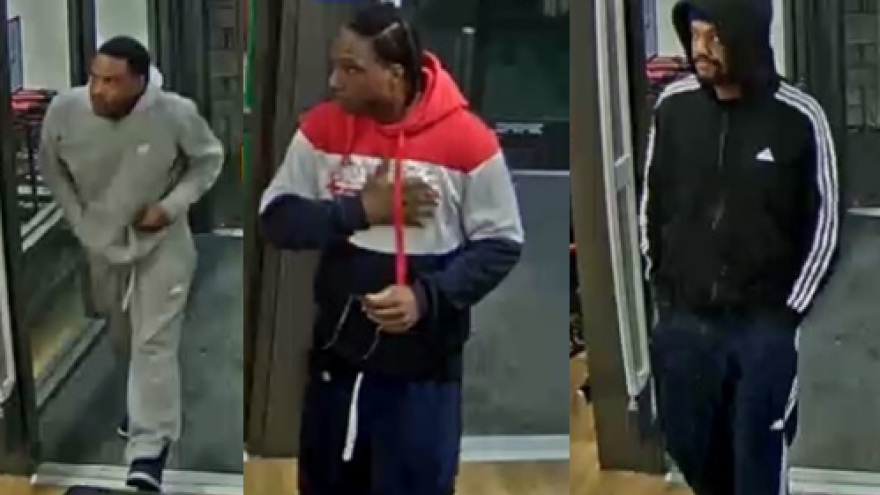 MENOMONEE FALLS, WI (CBS 58 ) -- The Menomonee Falls Police are looking for three men suspected of shoplifting at a TJ Maxx store.   The three are suspected of stealing nearly $260 worth of women’s coats.

According to a news release, the men entered the store separately around 5:30 PM on December 28.  Each man selected four or more women’s down coats and then fled the store, setting off the theft detection alarm.  The men were seen leaving the area in a gold Chevrolet Equinox with a license plate similar to ADE1257.

Suspect number 1 is described as an African American male in his early 30s, wearing a gray hooded sweatshirt, gray sweatpants and blue basketball style shoes. He was about 5’10” tall, weighing about 180 pounds.

Suspect number 2 is described as an African American male in his early 30’s, wearing prescription glasses, a red white and blue hooded sweatshirt, blue track pants and brown boots.   He was about 5’10” tall, weighing about 220 pounds.  The suspect had a cornrow styled hair.

Suspect number 3 is described as an African American male in his early 30’s, wearing a black Adidas hooded sweatshirt, blue Adidas track pants and blue or gray shoes. He was about 6’02 tall, weighing about 170 to 200 pounds. The suspect also has a short goatee or beard.

Anyone with information about these suspects can make an anonymous tip by contacting Waukesha County Crime Stoppers by calling 1-888-441-5505, through the website www.stopcrimewaukesha.com.