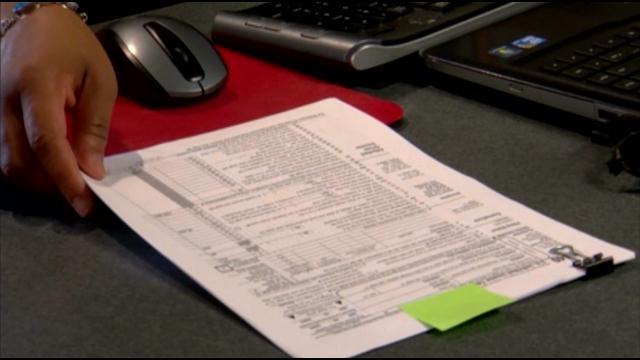 Tomorrow is deadline day for filing your taxes. Imagine filing your return only to find out someone else already got your hard earned cash. Todd Kirchenberg with Jackson Hewitt has seen just about everything in the tax world-- until this year.

Kirchenberg says, \"Their return has already been filed by someone else.\"

Once thieves have your name, birthday, and social security number-- they're using it to create fake W-2's to make your income look large, and then pocket the tax return.

\"It seems like it's getting out of control, since Saturday I've had six alone.\"

Kirchenberg says locals then have to call the IRS and fill out paperwork proving their identity was stolen, and that takes time.

\"It could take up to six months for them to get their refund.\"

CBS 58 called the IRS and found that the issue isn't just growing locally, it's all over the country. They say the Department of Justice opened an international investigation.

Michael Devine with the IRS says, \"The IRS is constantly updating its software to catch fraudulent returns, this year for the first time we are limiting the number of refunds going into a single account.\"

An IRS spokesman says don't carry or give out your social security number, even if a company asks for it-- instead offer your drivers license number. The good news is the IRS will give out your tax return once they verify your identity was stolen. And if you're a victim you have options.

\"They can apply for a special identification pin number to prevent tax thieves in the future to prevent thieves from using their information to file fraudulent tax returns.\"

As for Kirchenberg, he says it's adding one more twist and turn to the tax world.

\"This year it's popping up a lot more and the irs says it's going to happen a lot too.\"

The bad news for the IRS is the government is losing all this money to fraud. The IRS wouldn't say how much money was lost this year so far.