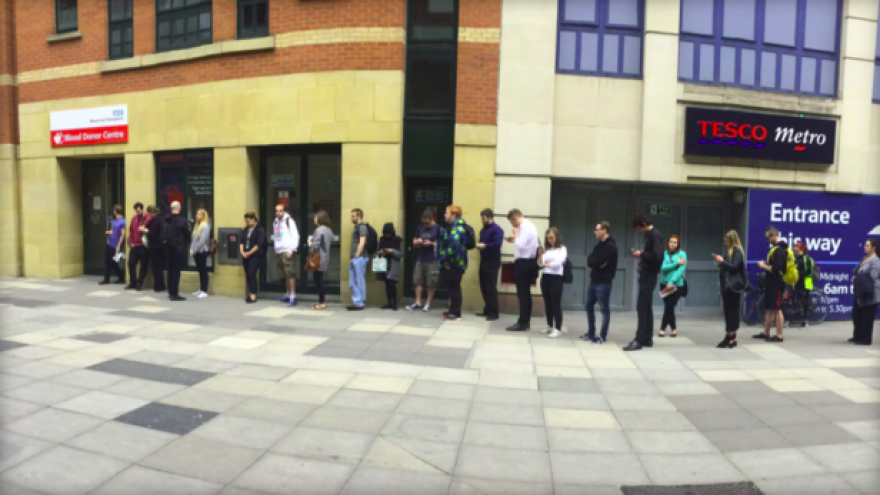 (CBS NEWS) Phone lines rang off the hook, social media flooded with inquiries, lines formed outside of blood banks and, at one point, the website for the NHS Blood and Transplant in the United Kingdom crashed due to high traffic on the site.

Everyone was looking for ways to help after a suicide bomb attack at an Ariana Grande concert left 22 people dead, including children, at one of the entrances to the Manchester Arena in northern England.

"Our phone lines are extremely busy and we have all the blood required for hospitals and patients at present," Give Blood NHS announced on Twitter just hours after the attack.

Even so, by 8 a.m., people were starting to line up at the dozens at blood centers in Manchester to offer donations.

Roy Ward, of Leeds, England, said he attended the Ariana Grande concert where the bomb went off Monday night. He was in the back of the upper tier of the arena on the right-hand side of the stage when he heard the explosion.

Ward was taking an early morning walk around the city when he spotted at least 30 people standing outside of a blood center, and was nearly brought to tears.

"It was a very frightening experience, but I wanted to try and enjoy having some time in Manchester City centre this morning and that's where I saw the line," Ward told CBS News. "People want to try to help and to carry on as normal."

It was a welcome sight in the midst of tragedy.

"I love this country sometimes, I really do," the 28-year-old said. "The queue just keeps growing."

Another man, who asked to be referred to by his first name, Kieran, said he tried to donate blood around 8:50 a.m. at the Norfolk House Blood Donor Centre, but it had already hit capacity.

"They were oversubscribed for the day because so many donors," the Manchester resident told CBS News. "I was not surprised. It's Manchester. Everyone wants to help."

So many people, in fact, that Mike Stredder, Director of Blood Donation at NHS Blood and Transplant, told CBS News they are no longer accepting donations right now.

"We were able to respond to last night's events in Manchester, meeting the demand for blood and blood products from the hospitals who are treating the casualties," Stredder said in a statement. "This is thanks to our loyal blood donors whose donations help us every day to save and improve the lives of patients."

People who have already made appointments with NHS Blood and Transplant, especially those with O negative blood, will still be able to donate, he added.

Jane Green, the chief nurse at NHS Blood and Transplant, said they have been working around the clock to provide local hospitals with everything they need to care for those injured in the attack.

"It's been a very, very, busy morning and day for us," Green said in a video posted by Give Blood NHS. "We've had a tremendous response from the public of Manchester and the wider Northwest today, and that's really kept us busy."