The controversial painting Congress refuses to brush off 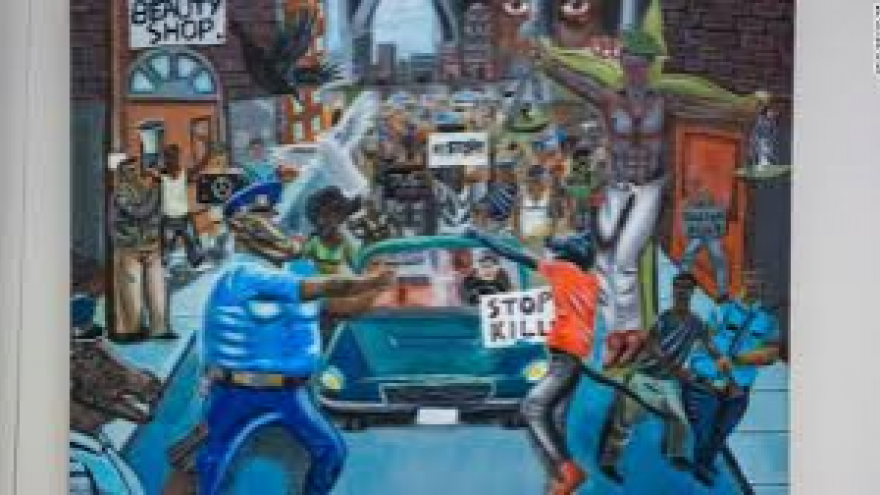 Washington (CNN)Just one week into the 115th Congress and the House is already in the midst of a full-fledged battle -- over constituent artwork in a Capitol Hill tunnel.

The tug-of-war over a controversial painting displayed in the Cannon tunnel of the US Capitol continued Tuesday as Democratic Rep. William Lacy Clay re-hung the painting three times after several Republican lawmakers pulled it down, criticizing it as being anti-police. The artwork depicts some police officers as pigs.

By Tuesday afternoon, it was taken down again, this time by Colorado's Doug Lamborn, who told CNN in a phone call he "did what I had to do."

Undeterred, Clay and an aide hanged the painting again.

Then, early Tuesday evening, Republican Reps. Brian Babin and Dana Rohrabacher teamed up to take down the artwork. Babin posted a photo on Facebook with Rohrabacher and the painting, which he called "irresponsible" and a "disgrace."

Clay returned the painting to its spot at 5 p.m. ET.

It's unclear whether the back-and-forth will continue, but in Tuesday morning's House Republican conference, Hunter received a round of applause from his GOP colleagues, his chief of staff, Joe Kasper, told CNN.

Fellow Rep. David Reichert said he will write a letter to the Architect of the Capitol calling for the painting's removal -- again. If the architect does not remove the painting, Kasper said, House Speaker Paul Ryan told members he will take steps toward removing the painting.

Each member of Congress can select a painting by a constituent to hang in the Cannon tunnel.

The painting, by high school student David Pulphus, won Clay's congressional art competition last May. Members do not select the artists, do not sign off on the artistic concepts and have no role in judging the competition, Clay said.

Speaking to reporters after first re-hanging the artwork earlier Tuesday morning, Clay called the saga of the painting a "manufactured controversy." He said it was "pathetic" that Republican members who "constantly refer to themselves as constitutional conservatives" would not apply "fundamental free speech rights" to the artist.

"It's not about the First Amendment, it's about the rules of the Capitol," Hunter said. "The art competition rules do not allow for this type of painting," which he described as "offensive."

Still, he said on Twitter Tuesday evening that he and Clay are friends, posting a photo of them shaking hands.The law enforcement community and several members of Congress first took issue with the artwork after its existence was reported by Independent Journal Review.

Clay blamed Independent Journal Review, which he described as an "alt-right blog," for stirring up the controversy. IJR is a conservative publication and a member of the News Media Alliance that co-hosted a presidential debate with ABC News during the primaries.

While Clay said he did not agree or disagree with the art and that he supported police, he later noted that the artwork is an indication of his 18-year-old constituent's worldview on police, citing the deaths of Trayvon Martin, Eric Garner and Michael Brown, among others.

Clay said Monday he planned to file a police report against Hunter for removing the painting, but on Tuesday, he said he has no intention to litigate further. He called Hunter a "good guy," and a "friend," but said he was disappointed by his actions.