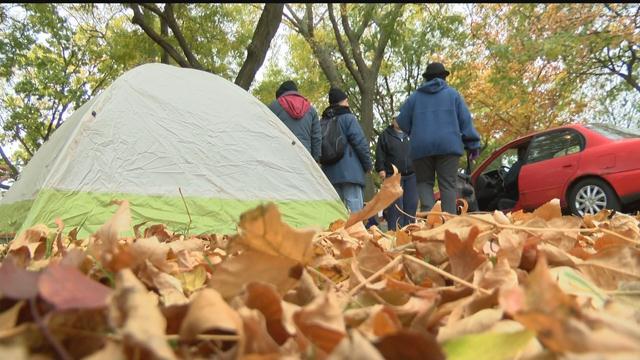 As you're getting ready to go to sleep in your own bed, dozens of others are giving up their beds to send a message about homelessness – sleeping outside in hopes of convincing the people in charge of the county budget not to cut funding for homeless shelters.

In a couple of months, this dreary, chilly and windy weather will seem nice. Around that same time, the Milwaukee homeless population, which officials say is the highest in the state, will be looking for a warm place to sleep.

If the $300,000 cut from the county budget isn't put back in some fear shelters won't be able to handle the influx of freezing people.

That's why Romo West, and others, turned Clark Square Park at 23rd and Mineral into a tent city. The goal is to give people an idea what actual tent cities are like, and what the homeless have to go through, especially in the sometimes potentially deadly winter cold.

"Staffing levels may not be at a safe level, and basically people who need service can get turned away," says Romo West.

People like Richard Gildemeister who, for the last three years, has been homeless. The once circus traveler now lives under the North Avenue Bridge on the east side, "I'm laying on a ledge, but I do have a mat that I found that I can blow up a little, you know, make it a little more cushiony."

Gildemeister was brought here to help get the message out not to cut homeless shelter funding. He says the life is far from ideal but that after a while he “got used to it.”

Supervisor Romo West plans to introduce her proposed amendment, to put the $300,000 for homeless shelters back in to the budget on Monday.