Target not removing fidget spinners with lead from store shelves 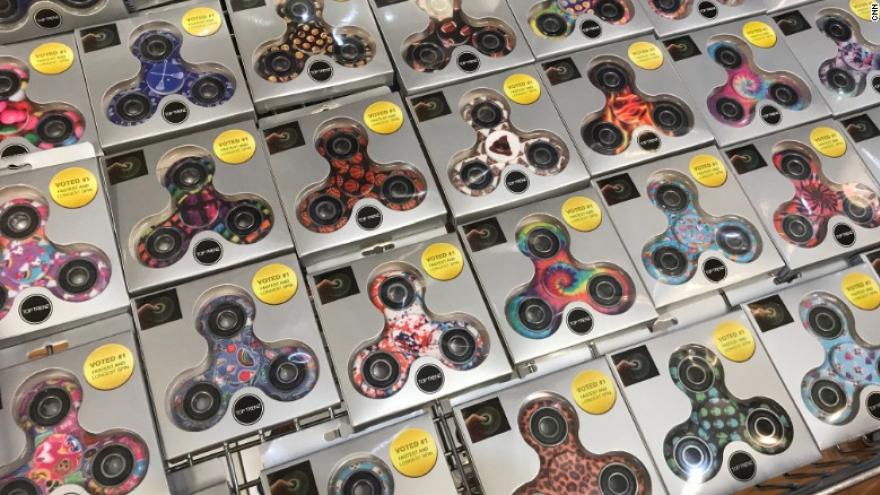 (CBS News) -- If you're thinking about buying your kids a fidget spinner this holiday season, you may want to think twice. This inexpensive and addictive little toy is already the topic of choking hazard warnings by the Consumer Product Safety Commission. And Thursday morning the US Public Interest Research Group revealed that some of the spinners sold at Target (TGT) contain dangerously high levels of lead.

The response from Target and the manufacturer: These particular spinners are recommended for consumers over the age of 14. That means CPSC lead restrictions for children don't apply, according to the companies. Products marketed to those over the age of 12 have no specific lead-level prohibitions.

"The Consumer Product Safety Commission (CPSC) has reviewed and explicitly defined fidget spinners as 'general use products.' They are not defined by the CPSC as toys," said Target spokesman Lee Henderson in a prepared statement.

Noting that US PIRG had provided Target with its lead testing results, Henderson added that the retailer's product safety team reviewed the consumer advocacy group's data and decided there was no need to pull the products from its shelves or website.

The manufacturer, Bulls-I-Toy, said in a letter to US PIRG that because the product packaging says this spinner model is for youngsters who are at least 14-years-old, "There are no mandatory CPSC requirements for it."

"All fidget spinners have play value as children's toys regardless of labeling," said Cook-Schultz. "We can't sit idly by while children play with these toxic toys. And, yes, they are toys."

Lead poisoning is considered most dangerous for young children because their rapidly growing bodies absorb the substance more readily, and they're more likely to put products in their mouths and near their noses, where the lead is most easily ingested. But lead is dangerous for everyone.

In children, lead can lead to hyperactivity, lack of appetite, behavior problems and learning disabilities. In adults, lead poisoning leads to brain and nervous system ailments, stomach and kidney problems, as well as high blood pressure, weakness, muscle problems and headaches, according to WebMD.

Target's spokesman failed to comment about why the retailer would sell a product that could be dangerous for adults. A spokesman for Bulls-I-Toy said the company's products meet CPSC guidelines. When a reporter noted that there are no lead guidelines for adult products, he reiterated: "As a company, we follow the guidelines issued by the CPSC."

Meanwhile, the CPSC has been warning about other spinner hazards.

"As the agency investigates some reported incidents associated with the popular product, fidget spinner users or potential buyers should take some precautions," said CPSC Acting Chairwoman Anne Marie Buerkle in an August statement.

Some of the pieces can break off and create choking hazards, she said. Moreover, light-up spinners often contain lithium coin cell batteries. If swallowed, these batteries can cause severe internal burns. Several reports have also said the devices can catch on fire while charging.

The CPSC noted that the agency classifies most spinners as "general use" products, rather than children's toys. Thus, they're not required to meet a variety of toy safety standards, including those that limit lead or phthalates content.

US PIRG's Cook-Schultz said the debate about whether the lead-laced products are a child's toy or an adult "stress-reliever" is beside the point: "These products are not safe," she said. "Let's get them off the shelves."