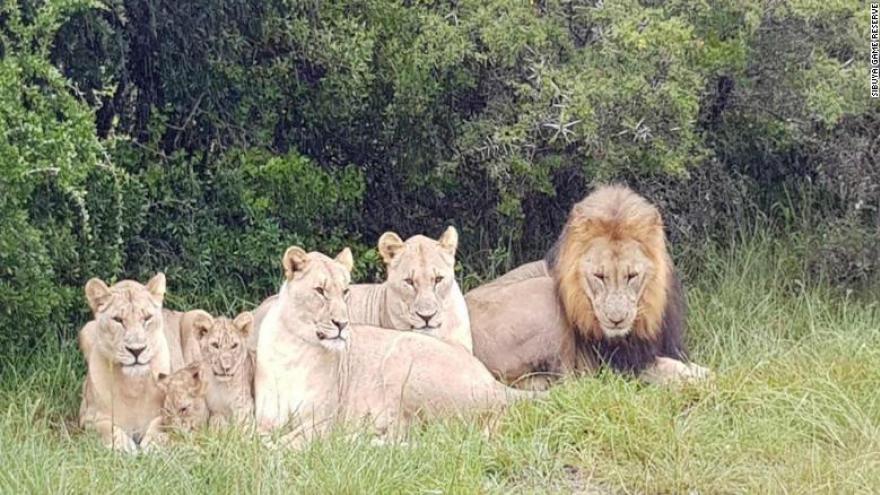 (CNN) -- Suspected poachers sneaked onto a South African game reserve to hunt rhinos, but a pride of lions found them instead.

A guide at the Sibuya Game Reserve spotted what appeared to be human remains on Tuesday near the group of lions, according to reserve owner Nick Fox. It was getting too dark to search the area, so police came back the next day with the reserve's anti-poaching unit and other specialists.

The remains were strewn over an area covered with thick brush and Fox said it was impossible to know how many people were killed.

They also found a high-powered rifle with a silencer, wire cutters and an ax that Fox said would have been used to remove a slain rhino's horns.

"We're almost 100% sure this is connected to rhino poaching," Fox said.

The six lions in the pride were tranquilized while the area was searched.

"Investigators and specialists combed the scene and managed to retrieve remains, which were taken by the Department of Health to conduct forensic testing. Investigation continues and at this stage we are unable to speculate as to how the remains ended up at the scene," South African Police Service Capt. Mali Govender said in a statement.

Fox said he thinks the poachers got onto the reserve on Sunday night or early Monday morning.

An anti-poaching dog signaled that it noticed something during a patrol about 4:30 a.m. and her handler heard a commotion from the lions. Lions are often active at night, so the noise didn't raise suspicions.

"The anti-poaching unit never suspected anything wrong because it was the lions making noise and not the rhinos," Fox said.

The poachers had a rifle, but they did not get off a shot before the lions took them down, Fox said.

"It was a bit of luck for us and not so much luck for them," he said.

The poachers were apparently on foot when they encountered the lions, which is very dangerous.

Fox said reserve staff and guests never go near the lions unless they're in big trucks.

He said they're watching the lions closely and they have shown no signs of being aggressive around vehicles.

Rhinos are endangered and are prized for their horns.

In 2016, poachers killed three rhinos at the Sibuya Game Reserve and hacked off their horns.

Fox said security was increased at the 25 square kilometer reserve in Kenton on Sea and installed more cameras to monitor the rhinos.