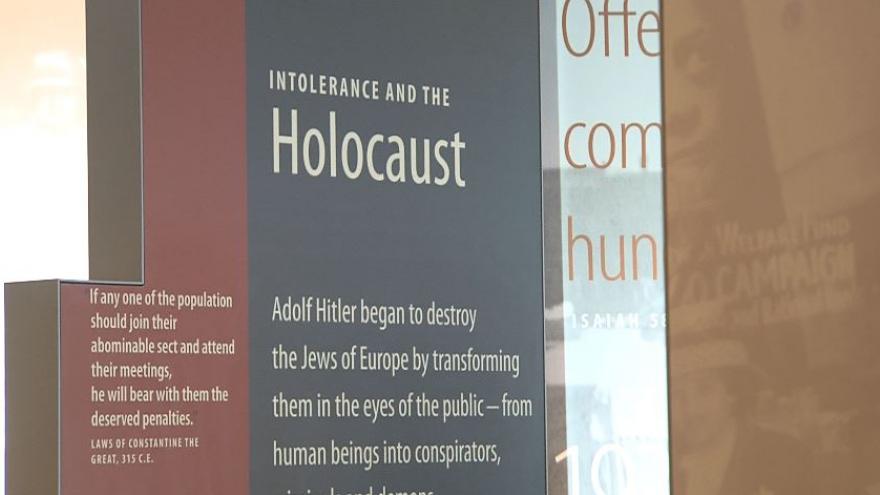 The first exhibit, Luba Lukova: Designing Justice, features the work of one of the most internationally renowned graphic artists and features 34 brightly colored posters tackling issues like inequality and immigration. The second, Shakespeare’s in the Alley: A Tribute to Bob Dylan, features hand-stenciled fabric banners with Bob Dylan lyrics that are suspended from the ceiling.

"In light of everything that's happening in our society right now, to have this incredible vehicle for dialogue, for building bridges, for fostering connections means a great deal to us," said the museum's curator, Molly Dubin.

These are the first new exhibits the museum has opened since reopening in August. The two exhibits, which are open until Jan. 31, 2020, were originally planned for summer and were meant to coincide with the 2020 Democratic National Convention but were delayed due to the COVID-19 pandemic.

"But the fact that it was pushed to the fall -- in light of everything that is going on in our society, the civil unrest, the divisiveness -- we feel that it's almost more timely (now)," Dubin said.

A new national survey released Wednesday is further demonstrating the importance of having museums like the Jewish Museum Milwaukee.

The survey from the Claims Conference showed 63 percent of Americans between the ages of 18-39 don’t know 6 million Jews were killed during the Holocaust. Only 90 percent of the respondents said they believed the Holocaust happened, and some people couldn’t name a single concentration camp.

"I think the thing that for me as an educator that is really damning is that so many of them saw the scope as being exaggerated," said the museum's education director, Ellie Gettinger.

Gettinger said while the survey findings were staggering, they will help provide more talking points when students come to the museum.

"We need to make sure ... we're letting people know on a daily basis as they're using our museum as a resource that this is a space where you can learn, and this is how the Holocaust happened and these are the numbers of people it impacted," she said.

State Sen. Alberta Darling said the findings reinforce the need for a bipartisan bill she authored that would mandate Wisconsin teaches Holocaust education.

"The Holocaust was the biggest travesty of man against man, and we don't want to have that history repeated," she told CBS 58.

Assembly Bill 816 would require education about the Holocaust and other genocides into high school and middle school social studies curriculum.

The bill passed the state Assembly unanimously 98-0 in February with some opposition from school groups. It was passed out of a Senate committee but still has to clear the full Senate.

"There was such great hope for this. People really thought it was a great idea. I'm sure we could pass it next session, but I want to get it passed this session because it had so much relevance," Darling said.

Eleven other states have made similar mandates.

The survey from the Claims Conference showed among all 50 states, Wisconsin scored highest in Holocaust awareness, but Darling and Gettinger agree there is more work to be done.