Support Blue: a Racine effort to back the badge 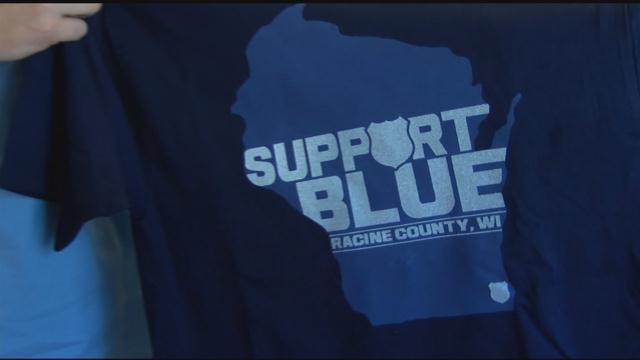 A Racine woman has seen too many times when police officers are hurt or killed.   She is now leading the charge to support law enforcement.

Beth David, the face behind Racine's popular news website \"Racine Uncovered News\" says it all started when a concerned citizen sent her a message asking what could be done to show support. It started with t-shirts, but its turned into so much more.

\"Especially now they're under so much scrutiny. I think often times people forget about law enforcement officers and the level of training they receive and stress they're under,\" said Racine County Sheriff Christopher Schmaling.

What Schmaling is talking about is exactly the mentality Beth David wants to fight back against. She's got many friends in law enforcement and says she's especially concerned about their safety.

\"You hear them go on calls and worry. But you think just by putting the uniform on and walking out the door are they going to be ambushed because of what they do and because they care?\" said David.

So she's now leading the effort to have Racinians wear how much they care.

\"I'm like I love t-shirts so that's a cool idea because they could be worn anytime to show support,\" said David.

With help from the \"Stitch Guyz\" David has created a \"support blue\" logo that will be printed on shirts, hoodies and decals.

\"Racine is a great place  and there's so many positive things but people like this bring it all together for us. It's like a hand shake or a thank you but one that you can wear on a t-shirt or put as a decal on your car and we appreciate that,\" said Racine County Sheriff's investigator Tracy Hintz.

David says she wants people to appreciate the softer side of officers like her friend, Hintz.

\"We're trained and professional and we will continue to go to work and be proud of what we do. But at the end of the day, I'm a mom and I have a 10 year old waiting at home for me,\" said Hintz.

David says the idea has taken off with hundreds of shirts pre-sold.

Though the shirts have yet to make it off the press Hintz says the support is well appreciated.

\"There's so much negativity with law enforcement that an effort like this to turn it around is whats gonna make it easier for me every day,\" said Hintz.

If you'd like a shirt, you have to buy one before September 20th and you can do so here: http://racineuncovered.org/2015/09/racine-residents-can-show-their-support-for-law-enforcement/   or here: http://www.thestitchguyz.com/racinepd

All proceeds go to the Wisconsin Concerns of Police group.