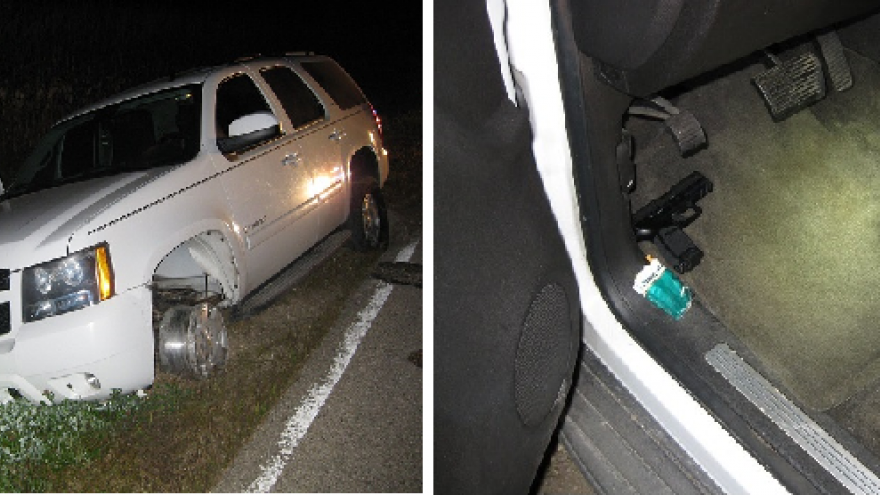 JACKSON (CBS 58) -- Early Sunday morning, just before 2:00, the Washington County Sheriff's Office received separate 911 calls about a white SUV "all over the road" on County Trunk NN near Church Drive in the Town of Jackson.

The callers stated the vehicle was last seen northbound on 18th Avenue. West Bend police were in sight of the SUV on Paradise Drive and attempted to make a stop, based on the Sheriff's Office request.

The 51-year-old Milwaukee man refused to exit the vehicle and a standoff ensued. The suspect denied any weapons and told deputies to "come and get me". The suspect is a convicted felon with a lengthy criminal history, including weapon violations. It was also determined he had a temporary restraining order against him, issued from his wife, that had not yet been served.

After 45 minutes, the suspect was able to get his SUV out of the ditch and another pursuit ensued. This pursuit, again low speed, lasted for six miles and ended when the vehicle went in the ditch. Again, he refused to exit and told law enforcement, "This will end in death."

Shortly before 3:30 a.m., the Washington County SWAT Team was called to the scene. He was taken into custody just after 4:30 a.m.

After his arrest, investigators found a handgun on the front floorboard and spent casings throughout the vehicle. Milwaukee police were contacted to check the welfare of the suspect's wife. At the residence, no one answered and empty shell casings were located in the driveway. Several hours later, the wife was located and said to be ok.

The suspect remains in custody at the Washington County Sheriff's Office on weapons charges, felony eluding and fourth offense OWI.