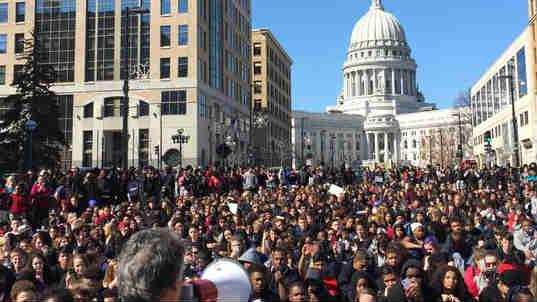 More than 1,000 students both from high school and college walked out of class and filled the streets Monday chanting the name of the 19 year old unarmed man shot dead during a confrontation with a Madison police officer Friday.

The name Tony Robinson was heard over and over again as they demonstrated in front of the state Capitol.

Many of the protesters moved into the rotunda. The demonstration went on for about 40 minutes.

The group then exited the building without incident.

Madison's Police Chief apologized and offered condolences to the Robinson family on his blog Monday.

Chief Michael Koval wrote that \"reconciliation cannot begin without my stating 'I am sorry,' and I don't think I can say this enough. I am sorry. I hope that, with time, Tony's family and friends can search their hearts to render some measure of forgiveness.\"

The circumstances of the shooting are being investigated by Wisconsin Department of Justice.

It was Friday that officers responding to a call of person wanted for suspected assault and erratic behavior.

Initial information is that the officer says he was forced to use lethal force after getting into his own violent confrontation.

The Uncle of Tony Robinson spoke for the family Monday afternoon outside the home where Robinson was killed.

Turnin Carter say this is a bigger issue than just Tony, that it's about police procedures.

\"It's obvious it's hard to let go of Tony because he meant so much to us,\" Carter said in a lengthy statement. \"Even now I feel and my demeanor here being the same spot. I'm five years older than him, he's more like a little brother. I had to learn how to be a nephew so with that being said, I just encourage everybody to support as much as possible #tonyrobinson #justice for Tony.\"