NOW: Texas residents with ties to Milwaukee share stories of challenges and resiliency during energy crisis

MILWAUKEE (CBS 58) – As thousands in Texas continue to face challenges because of the dual crises of severe winter weather and damaged energy sources, CBS 58 spoke with those with ties to the Milwaukee community and people in the city with family back in the Lone Star State.

Garrick Jannene lives in Austin, Tex., but is originally from Janesville and a graduate of the Milwaukee School of Engineering. He says he’s fortunate to evade the worst of the issues, but still faces problems.

“We are starting to lose water. It’s down to a trickle,” Jannene said. “But there’s been thousands of pipe bursts across the city. […] We are under a boil water notice. We are not alone with that, it’s Austin, Houston, Fort Worth and San Antonio and that’s assuming you have water.”

Others in Austin also face issues with water access.

“I’ve had no water since Tuesday, I don’t know when I’m going to get water back,” Annette Mitrosz said in an interview. Mitrosz is a Marquette University alumna and president of the university’s Central Texas Alumni Club.

“The grocery stores on Wednesday had three-plus hour long lines wrapped around the outside around the buildings kind of like everyone witnessed in the beginning of COVID, with the pandemic buying, everyone is doing that now because no one knows when they’re going to get water back,” Mitrosz said.

It’s also been difficult for those in the Milwaukee area with family in Texas.

“It was now four days ago that most of my family in the Houston area and my friends in the Austin area have been without power, and for the last two days without water,” Kiersten Lindstrom, a realtor from Milwaukee told CBS 58.

Lindstrom said her family has had to deal with things like burst pipes and flooding because of the weather.

“They’re trying to get by as best as they can,” Lindstrom said.

Beto Soto plays on Marquette’s men’s soccer team and has family in Houston. He said his mother was prepared with supplies of water and food because of experiences with previous hurricanes, but communication with his family has been sparse because of the emergency.

“It’s been quite hard getting in contact with my parents since they don’t have any power, they want to keep their phone charged,” Soto said.

One bright spot among the stories shared is Texans’ spirit of helping each other, a trait shared with Wisconsin.

“Texans are really great about that, they will help each other out,” Lindstrom said.

“The stereotype is true,” Jannene said. “There’s a lot of Texans with big trucks, the city and some other groups down here have been recruiting people who have four-wheel drive to go around, pick people up, take them to warming shelters.”

“That’s one thing I love about Houston,” Soto added. “People are always caring for other people, neighbors are always looking out for other neighbors.”

Jannene shared the resource below for people who want to help those in Texas: 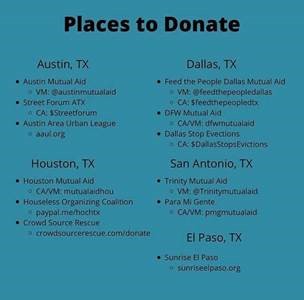