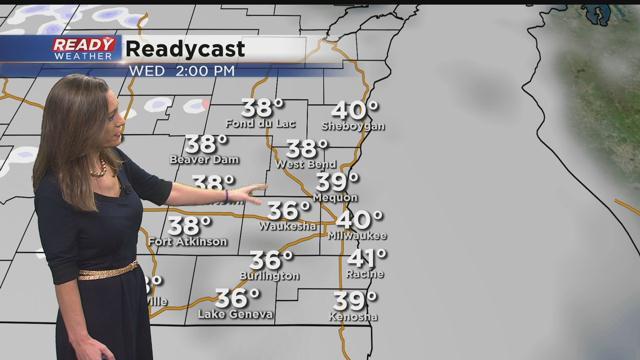 It's probably no surprise to hear that we continue to run well above normal on temperatures. For the 8th consecutive month we've been running warmer than normal and the fall season has seen some of the biggest departures from the average temps. While that's great for folks who love warm weather, myself included, it may just be staving off our first snowfall. To date, November is running over eight degrees above normal, and other than two days with a few flurries, we have yet to see our first measurable snowfall which is defined by a tenth of an inch.

After the daily record rainfall yesterday of 1.08", it got me wondering more about the lack of snow. Looking back at the last five years, here are the dates of our first snowfall for the city of Milwaukee: 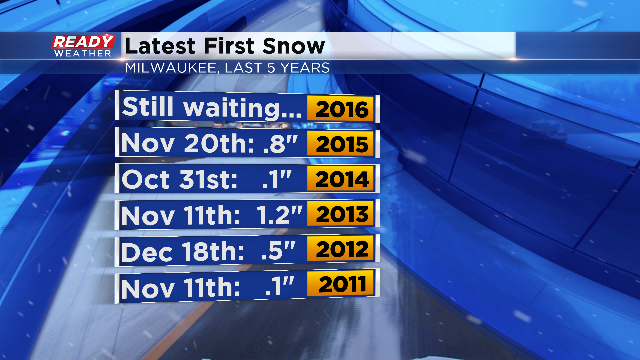 As you can see, 2012 is the latest first snow that took us into the month of December.

The average monthly snowfall appears on the books as early as October, when .3" is average. During November, 2.4" is the average amount of snow for Milwaukee. By December, the average jumps to 10.6" and is the second snowiest month behind January. Taking a further look as far back as snow records go in terms of "First Snowfall" we have over seventy five years to look back at.

Turns out, since 1940, there have only been eight seasons where we did not receive measurable snow until the month of December. Check it out: 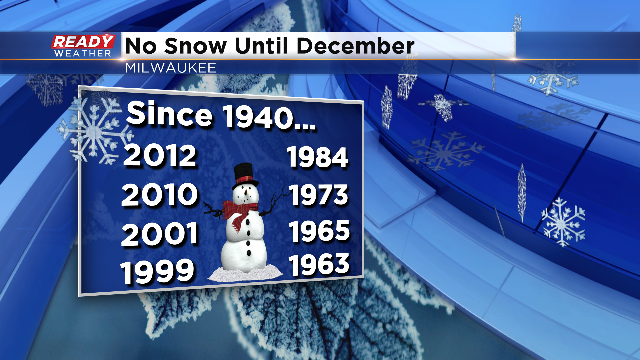 And although we do have flurries in the forecast for tomorrow, temps will be in the low 40s and so sprinkles and drizzle are equally as likely. And anyway you slice it, there's not much accumulating precipitation expected on the day. So, if we go without a tenth of an inch of snow tomorrow, this year would then be the ninth time we've held off on snow until December. Good stuff! On the flip side, our forecast now takes us to December 10th and we have several chances for snow in the days ahead. The first arrives this Sunday and models are brewing a potential large storm toward the end of our next work week. While it does look like all precipitation types will be possible there, I'd also put money on this time frame finally giving snow lovers their wish. Time will tell!