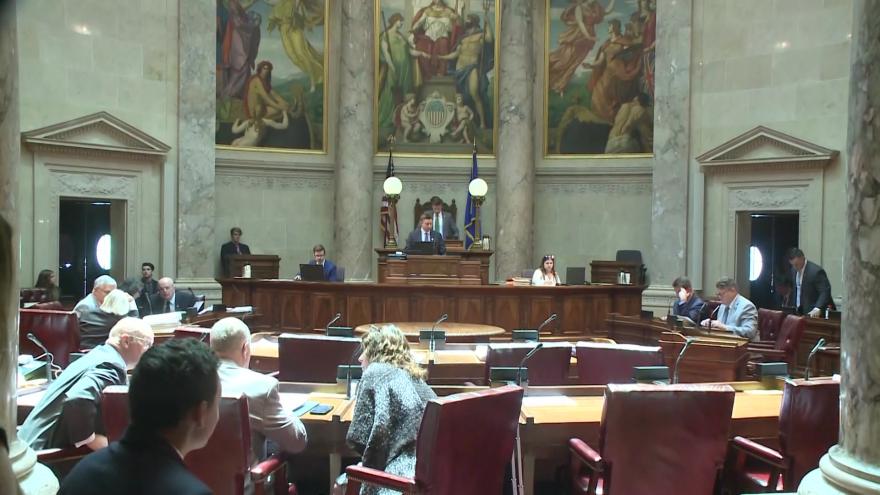 MADISON, Wis. (CBS 58) -- The Wisconsin State Senate has passed the next state budget, a move that will send the nearly $88 billion bill to Gov. Tony Evers' desk where he can sign it, veto it or make changes with his line-item veto powers.

On Wednesday, the Senate passed the budget 23-9, which largely consist of Republicans' plan to cut $3.3 billion in taxes and eliminates many of Democrats' priorities.

The $87.5 billion budget, largely crafted by Republicans, increases spending by 5.4%, which is about $4 billion less than what Gov. Evers proposed.

The major aspect of the next spending plan for the state includes Republicans' plan to cut income and property taxes as well as eliminate a tax paid by businesses.

Property taxes would also be reduced by $650 million under the GOP proposal, which would save a typical homeowner about $100 by December. However, property taxes would then rise next year by about $30, according to the nonpartisan Legislative Fiscal Bureau.

"It's not every day you can say we are going to pass a budget that provides over 3 billion in tax cuts and putting that money back in the pockets of hardworking Wisconsinites," said Sen. Patrick Testin (R-Stevens Point).

In a separate piece of legislation, Republicans voted to eliminate the tax which businesses pay on equipment and other furnishings by setting aside $202 million in the budget to pay for it.

Lawmakers debated the $128 million education budget for K-12 schools for hours, with Democrats calling for more money in order to help districts rebound from the pandemic.

"This budget kicks dust in the face of our teachers, students and administrators who sacrificed for the last year only to have this shell game system of we're going to give money to districts, but it doesn't actually go to the kids," said Sen. Chris Larson (D-Milwaukee).

While Republicans invested $128 million over the biennium for schools, their plan places revenue caps on how much schools can spend. This means schools will not be allowed to spend more money than years past, keeping their funding flat.

Republicans defended their decision by referencing the billions K-12 schools are getting from the federal coronavirus relief package.

"There is so much money out there and I think [districts] would have a difficult time spending all of that federal money," said Sen. Dale Kooyenga (R-Brookfield). "They have what they need to be successful, so I feel good this education budget is sufficient."

The governor proposed over $1.6 billion for K-12 schools in his budget.

Once the budget arrives on Gov. Evers' desk he has six days, excluding Sunday, to act on it. The governor has some of the most powerful veto powers in the county where he can strike out words, numbers and remove entire sentences in the budget.

The governor options include signing the budget, rejecting it entirely or using line-item vetoes to make changes.

While Evers has expressed disappointment over what he believes is a lack of funding for K-12 schools, a new memo states vetoing the entire budget would put Wisconsin at risk of losing billions in federal funds.

The fiscal bureau issued a memo that says an outright veto would cause Wisconsin to lose more than $2 billion in relief aid.  This is a pressure point Republicans hope discourages the governor from rejecting the bill.

"When [Evers] looks at the document, he's going to have very difficult time vetoing the entire budget," said Testin.

Despite potentially losing out on that funding, some Democrats still want Evers to send a strong message to Republicans that the budget "falls short" and doesn't properly fund schools.

"I think [Evers] should send it back to Republicans to actually fund the schools," said Larson. "It's on Republicans who did this budget incorrectly."

While Evers wanted to continue offering a tuition freeze to colleges students at UW campuses, Republicans are seeking to eliminate it in the budget.

Lawmakers did approve giving the UW System more than $8 million over the biennium, more than Evers asked for.

The measure would not put a limit on how much tuition could go up, but Sen. Kooyenga warned UW officials not to raise tuition.

"The people I talk to at the UW know we're watching, we're the check and balance on this," Kooyenga said.

An area of common ground for Republicans and the governor is rebuilding I-94 near downtown Milwaukee, a project that could be pushed back to 2022.

More than $80 million was set aside to prepare for the project, but businesses and nearby communities remain at odds over the project.

Nearly 400 policy items, all at once, were eliminated by the committee over the last few weeks, which also included police reform, implementing red flag laws to allow a judge to remove guns from those may be a threat to themselves or others and restoring collective bargaining rights for state employers.