Some wacky ways Milwaukee gets in on some early St. Patrick's Day fun 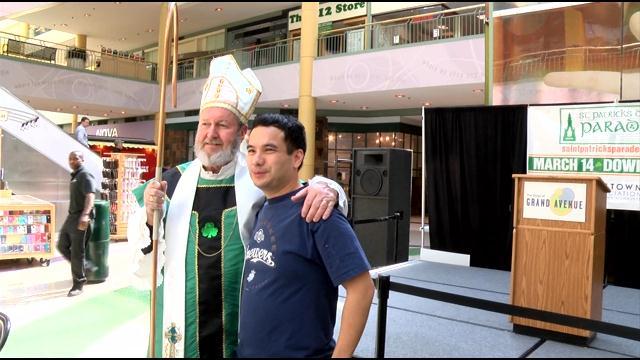 St. Patrick's Day is a respected holiday for many that is religious in nature on March 17th.

So,  you'll have to forgive the Americans if they like to have a little fun a little early.

It's with a healthy heaping of humor that the Westown Association put on the annual Jake's Deli Corned Beef eating contest.

Realizing that many abstain from meat on Fridays during the Lenten season the goal is to get folks down to the Shops and Grand Avenue and get them excited for the parade that steps off the following day, Saturday at 3rd and Wisconsin.

Jake's Deli workers are well aware that native Irish eat ham or bacon, or a lovely dish called coddle, rather than corned beef. But they also have to keep up with the demand for it that comes in this time of year.

This year's winner was Teddy Delacruz who ate seven sandwiches in eight minutes. That ties the record set last year.

Each sandwich weighs a half pound.

At about the same time the eating contest was under way, students at the Milwaukee School of Engineering held an egg drop contest in honor of St. Patrick. After all, he is the Patron Saint of engineers.

Students had to engineer a way to protect a raw egg during a three story drop using conventional items.

Ten of the thirty eggs survived the impact intact.

What's the secret to success?

\"Increasing time of impact,\" declared a freshman who told  us her her name was \"Stormy McFaul.\"

Her teammate Katherine Chitko added that they put a lot of stuff on the bottom as a cushion.

\"We increased the air resistance by putting the parachute on top.\"