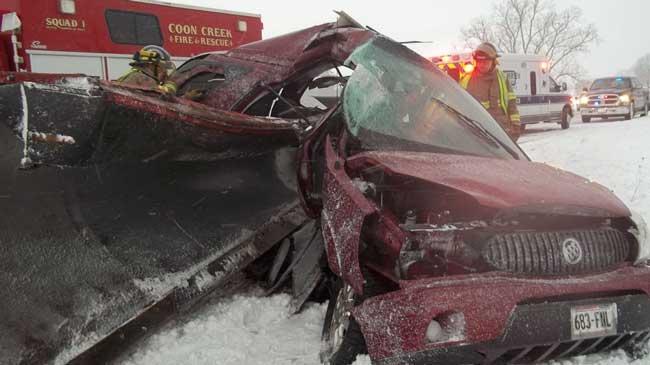 VIROQUA, WIS (MADISON.COM) A SUV was sliced into by a snowplow causing serious injuries to the driver of the SUV when the blade became embedded into the vehicle, according to Madison.com.

The Coon Valley Fire Department had to use the Jaws of Life to get Blatz out of the SUV, the report said.

A Viroqua man lost control of his SUV on a slick Vernon County highway on Tuesday hitting the snowplow.

Viroqua is Northwest of Madison.

The crash happened at about 4 p.m. on Highway 14 near Town Hall Lane between Westby and Coon Valley, the Sheriff's Office said.

The SUV driver, Brian Blatz, 55, was taken to Gundersen Health System in La Crosse with serious injuries, while the plow driver, Dennis Purvis, 44, rural Viroqua, was not injured.

The report said Purvis was operating the town of Coon plow truck west on Highway 14 and Blatz was driving east, when the SUV fishtailed and crossed the center line into the path of the plow.