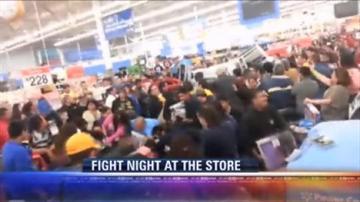 MILWAUKEE-A fight between Walmart shoppers at the Midtown Shopping Center Thanksgiving morning turned out to be the tamest of disturbances reported with holiday shoppers.

Late Thursday night shoppers with cell phones began posting video showing out of control crowds, flying items, and sometime uniformed officers handcuffing shoppers. Some of the most disturbing video was coming from Tennessee and Florida.

At Southridge Mall the lines formed early for it's opening at 8 p.m. Thanksgiving.

Several stores set up rope lines and had security personnel at the door to maintain crowd control.