Shooting At 'Zombicon' Leave One Dead, Five Wounded; Killer on the Loose 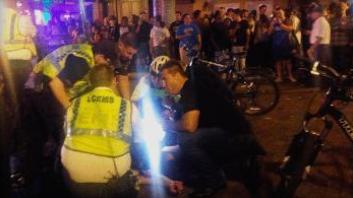 (CNN) Chaos broke out at a zombie-themed street festival in downtown Fort Myers, Florida, after shooting left one man dead and five other people wounded.

Crowds of festivalgoers fled screaming through the streets after the shots rang out late Saturday at ZombiCon.

"It cleared out fast and cop cars and ambulances came," said Savannah Holden, who watched the panic unfold from a hotel balcony.

One man died of a gunshot wound at the scene, police said, and five other people suffered non-life-threatening injuries. Four of them were taken to Lee Memorial Hospital for treatment.

There were initial reports that four people were wounded, but police said Sunday that they found another shooting victim who had refused medical attention.

Detectives have been canvassing the area for witnesses, authorities said, asking anyone with information on what happened to call the Fort Myers police.

The deadly shooting took place at ZombiCon, a festival that features bands and DJs performing on stage in the downtown area to people dressed in zombie costumes. It draws upward of 20,000 attendees, police said.

Festivalgoers could enter the event through six different points in exchange for a $5 donation toPushing Daizies, the local artists' charity that organizes it.

The organizers said they were "deeply saddened by the news of what happened within the footprint of our event."

"We take the safety of our patrons very seriously and take precautions in hiring security and police officers for our annual event," they said in a post on their Facebook page. "Our prayers go out to the family members and individuals involved in the incident."

Authorities are asking for anyone with information on the shooting or who may have cell phone footage helpful to the investigation to call the Fort Myers police at 239-321-7700 or Crime Stoppers at 1-800-780-TIPS.