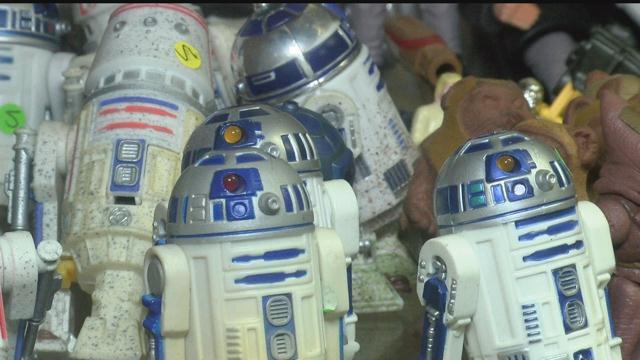 Star Wars: The Force Awakens is one of the most anticipated movies of the year; some may even argue the decade.

Matthew Rieley, owner of FreakToyz in downtown Sheboygan, is a huge Star Wars fan. He even remembers watching the first sci-fi film back in 1977.

“It was just amazing at the time, it’s still amazing now,” he said.

Recently, Rieley and his wife were brainstorming on how to give back to the local community for the holiday season. And with the release of the latest Star Wars film, he went to speak with managers at the Marcus Theater in Sheboygan.

“We were able to purchase the tickets for an entire theater. And decided we would give them all away,” Rieley said.

He said the idea to hand out the tickets for free, was just an idea that popped into his head.

“That’s what this is all about, its about having fun and smiling,” he explained.

Rieley teamed up with a couple of organizations including “Project Angel Hugs” and “Big Brother Big Sister”  to hand out 72 tickets to see the latest star war film.

“There’s million of million Star Wars fans out there and this is a good way for all us to come together and enjoy the same thing and bring a little cheer to people’s lives.”

His action is getting attention across the country. Some local children have donated their allowance to help pay for the theater. Rieley says he was left speechless and plans to donate the money to the local organizations helping distribute the tickets.

He says another man called from Massachusetts and bought 15 gift cards to be given to local charities.

Riley says he would have booked out a larger theater, but none were available. But since a new Star Wars film is scheduled to come out every year over the next 5 years, this is a new tradition he plans on continuing.

He also say he plans to attend the screening on Friday, but he’ll likely have to go see the movie again, because the first time he’ll focus on everyone’s reactions.