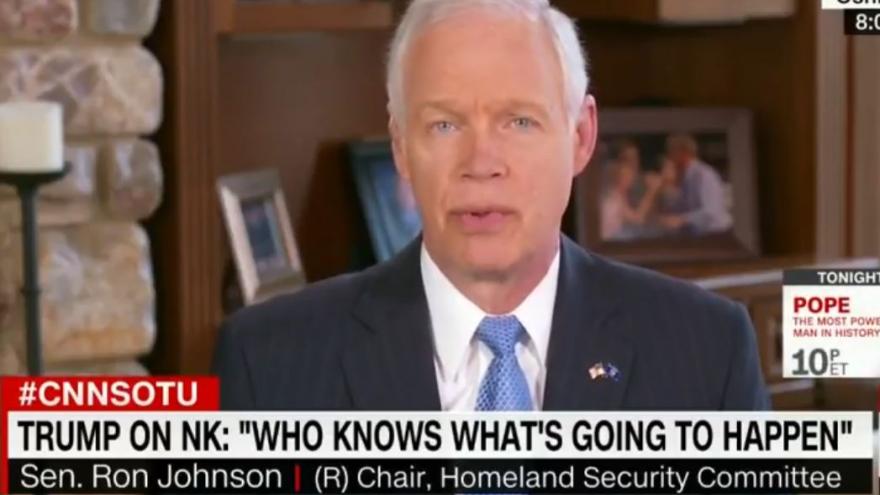 Washington (CNN) -- Republican Sen. Ron Johnson said Sunday that President Donald Trump must continue to ratchet up pressure on North Korea to denuclearize, even as the two countries prepare to meet for talks.

"We can't do what we did with Iran and let off the pressure and then just watch the behavior go in the wrong direction," the Wisconsin Republican, who serves on the Senate Foreign Relations Committee, said on CNN's "State of the Union."

"I would say ratchet up the sanctions against North Korea until they actually do, in a verifiable fashion, denuclearize," he continued.

The psychology of a con is a complicated science. But it might have more in common with our everyday relationships than we think.

White House principal deputy press secretary Raj Shah said Sunday that there are no preconditions set on a potential summit between the two nations.

Johnson said Trump "has been engaged in the maximum pressure campaign," which he believes "is having its effect." But the senator also said that he hopes that by agreeing to the meeting, the President isn't being naive.

"Let's not be snookered again. Let's not be Charlie Brown to North Korea's Lucy," Johnson said.

"I think talking to people is never a bad idea as long as we maintain that pressure," he continued. "I've never quite understood the enormous diplomatic gain by just sitting down and talking to somebody as long as you maintain the pressure, so I'd rather talk to people to prevent any kind of miscalculation."

Later on "State of the Union," Democratic Sen. Elizabeth Warren of Massachusetts also said she worried the North Koreans will hoodwink Trump.

"I am very worried that he is going to go into these negotiations and be taken advantage of," Warren said.

Warren warned about the lack of permanent personnel in key State Department positions and said the situation made complicated negotiations more difficult.

"It's good to move to diplomacy," Warren said. "The problem right now is these are very complicated negotiations. There are a lot of issues involved in them, and our State Department has just been decimated."