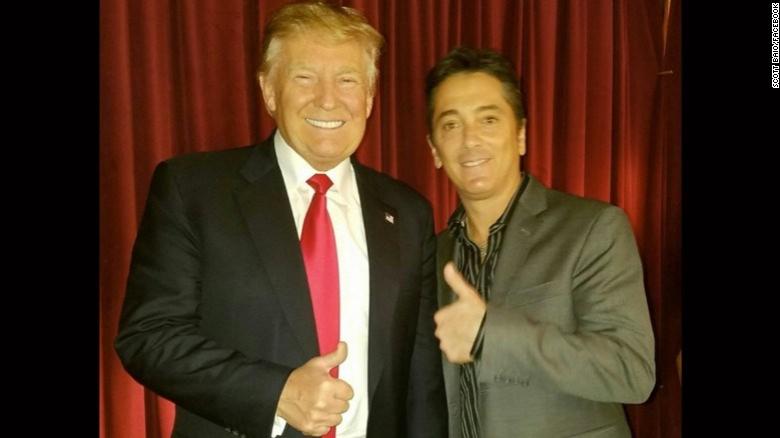 "I was at a fundraiser for Mr. Trump the other night with my wife and he invited me to speak at the convention, which was completely unexpected and out of left field," Baio told Judge Jeanine Pirro on Fox News.

The GOP believes they will highlight the Republican Party’s commitment to protect our country by strengthening our military, securing our borders, defeating terrorism, and supporting the people who keep our communities safe. Tonight’s speakers will express their support for Donald Trump, who will provide strong leadership for a safer America.

See excerpts of headline speakers’ remarks as prepared for delivery below.

“We need a president who will have our back.

“I can promise you this: no matter who you are, DONALD TRUMP WILL HAVE YOUR BACK.

“If you’re looking for a job… or trying to grow a business… DONALD TRUMP WILL HAVE YOUR BACK.

“If you’re a serviceman fighting overseas… or a cop keeping us safe at home… DONALD TRUMP WILL HAVE YOUR BACK.

“If you’re an average American who feels like you’ve been forgotten… neglected by far away leaders… that the deck is stacked against you and you just can’t win… DONALD TRUMP WILL HAVE YOUR BACK.

“But Donald Trump will always – always – tell you the truth as he sees it.

“And that is why we can trust him to make America great again as our next president.”

"We have a choice in November.  We can go for Hillary Clinton: who wants to continue the same policies that are wrecking this country.  Policies that make us unsafe.  A woman who somehow feels entitled to the presidency . . . that she is somehow owed it."

"Or we can go for Donald Trump:  A man doing this from the goodness of his heart and genuinely wants to help.  A man who knows how to get things done . . . and a man who says what he means and means what he says."

OPTIONAL INTRO IF NEEDED TO SET STAGE:
“Thank you America for showing us the support and dedication that should have been offered by Hillary and her State Department to those who saved their butts.”

"More than 30 American lives were saved that night.
It’s because Americans never give up.
We refuse to lose.
Benghazi is not about politics.
It’s about opportunities."

"Opportunities taken when we defied stand down orders and opportunities squandered when Hillary Clinton failed to protect her people on the ground.
Had she done her job, we would not have had to compromise the annex."

"Now we as Americans have the opportunity to elect someone who will make this country safe again.”

“Brian was supposed to come home to Michigan for Christmas for the first time in three years. Instead of celebrating the holidays with him, we buried him not far from the family home. Two weapons recovered at the scene were traced to the Obama Administration’s doomed “Fast and Furious” gun-tracking operation. No one was ever held accountable for its failure.”

“The best way to honor him is to honor his fellow Border Patrol officers. They need the personnel and equipment required to keep our borders secure.”

“Only one candidate is serious about border security: Donald Trump. He will give our heroic Border Patrol agents the resources and support needed to do their jobs. President Trump will make America’s borders secure again.”

“In 1963, Dr. Martin Luther King Jr. wrote passionately about “the interrelatedness of all communities and states” and about our “inescapable network of mutuality, tying us in a single garment of destiny.”

“He spoke of the basic morality of the rule of law, provided that it is applied equally to both the wealthy and the impoverished; both men and women, and yes, the majority and the minority.”

“Donald Trump understands that what can make our nation safe again is a recommitment to a justice system in which no government official, not even those who have fought their way to the marble and granite halls of Washington; no private citizen, not even Hillary Clinton; and no group of people, despite the fervor with which they press forward their grievances, can claim privilege above the law.”

“We don’t fight because we hate our enemies, but because we love our country.  We love its freedom.  We love that we’re born equal and live free, that no one rules without consent.

“We know these things are worth fighting and dying for because they make life worth living for.

“Our warriors and their families don’t ask for much.  But there are a few things we’d like.

“A commander-in-chief who speaks of winning wars and not merely ending wars, calls the enemy by its name, and draws red lines carefully, but enforces them ruthlessly.

“And politicians who treat our common defense as the chief responsibility of our federal government, not just another government program.

“This isn’t much to ask for, but eight years without it is more than enough.  So I say again: In a Trump-Pence administration and with a Republican Congress, help is on the way….

“And for that cause, I speak tonight not only to Republicans, but to the millions of independents and Democrats who share that dream and who wish to make America safe again.”

“Tonight, Americans stand as one, with strength and confidence to overcome the last eight years of the Obama-Clinton failures such as bumbling indecisiveness, willful ignorance, and total incompetence that has challenged the very heart and soul of every American, and single-handedly brought continued mayhem, murder and destruction into our neighborhoods and onto the world’s streets.”

“Let me be clear – coddling and displays of empathy toward terrorists is not a strategy for defeating these murderers as Obama and Hillary Clinton would like us to believe. And releasing terrorists will not end this war; on the contrary, it simply emboldens the terrorists and prolongs war. Under Barack Obama, we have no coherent strategy to protect our citizens, and under Hillary Clinton, it will be more of the same.”

“I promise you that Donald Trump knows that the primary role of the President is to keep us safe. He recognizes the threats we face and is not afraid to call them what they are. Donald Trump’s leadership, decision-making and problem-solving abilities will restore America’s role as the undeniable and unquestioned world leader. He will lead from the front, not from behind. He will lead with courage, never vacillating when facing our enemies or our competitors. And he knows that the advantage in life, in business, and in wartime goes to the competitor that does not flinch and does not broadcast his game plan.”

“The question I hear time and again is ‘where is America’s leadership?’ There's a void in the world: a deficit that cannot be filled by others. Our country and the world of which we are a part simply cannot afford four more years of this lack of leadership under Hillary Clinton.

“Our allies see us shrinking from our place as a leader in the world as we have failed time and again to address threats. They are looking for American leaders who are willing to stand up and say ‘enough is enough.’

“Unfortunately, Hillary Clinton cannot be trusted. Her judgment and character are not suited to be sitting in the most powerful office in the world.

“She has already failed us too many times before.…

“We need a commander-in-chief who will stand up to our enemies, support our allies, and stand up for our veterans. We need a leader who will ensure America remains a strong, stabilizing force around the globe, and who will keep us safe here at home.

“Our country cannot take another four years just like the eight we’ve just had. It is time to stand up and fight for the security of our children, our grandchildren, and ourselves.

“With Hillary Clinton it’s always about her, when it should be about you. Donald Trump is focused on you. He gave voice to a movement of millions of Americans who are tired of politics as usual, and I know as president he will work tirelessly to keep our nation safe.”

“Today, at this crucial point in our history, can we summon the spirit that forged our nation and bound us together under principles of liberty and justice for all?  It’s time for us once again to choose freedom over tyranny.

“Over the last eight years, the US has traded her role of active leadership for that of a passive observer. Americans have been told that the US has not always been a force for good…that since we have made mistakes, we should forfeit our leadership or “lead from behind.”

“This thinking has endangered not just the US but freedom across the world.  The results fall squarely on the shoulders of the current administration, supported by Hillary Clinton….

“It’s time we put someone in office who holds the same conviction that we hold… that my fellow warrior heroes and I hold…and that my friends bled and died for.

“As service members, we live by these convictions. Imagine a country where our President shares those convictions and upholds the honor of our military, a President who knows our past and defends liberty.  With that leadership, we will go over the top and into the teeth of the 21 century.

“In Donald Trump’s America, we will have that leadership AND the only time service members will get on their knees will be to thank their God that they are Americans.”

“Together Barack Obama and Hillary Clinton brought us ISIS and brought down Benghazi. I shudder to think at how many more times our flag will be at half mast if Hillary Clinton is sitting in the Oval Office.”

“Donald Trump isn’t afraid to talk about radical Islamic terrorism, and he won’t be afraid to destroy it.”