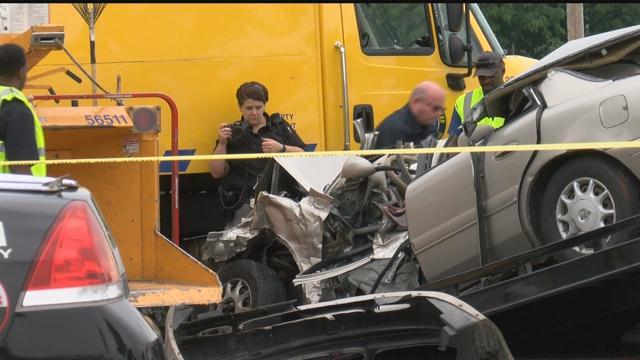 CBS 58—A deadly crash last week prompted police to issue new warnings about reckless driving in the area and now a school is calling for more safety measures.

Police suspect the driver of the crash at 76th and Sheridan was going about 70 miles per hour, in an area where the speed limit is 35. The driver and his passenger were killed.

Now Greater Holy Temple Christian Academy, which is located near that intersection is pushing for safety measures to keep students safe.

The school is on 76th Street, between Sheridan and Silver Spring, and right now there are no school zone signs-and no crossing guards in the area.

“You can't un-see it,” said Edward DeShazer, the executive director of Greater Holy Temple Christian Academy, about the fatal crash. “After seeing what I saw last Thursday, it's definitely something that has to be done.”

DeShazer says people regularly go between 50 and 70 miles per hour down 76th, right past his school.

“I'm surprised that something like this hasn't happened a lot sooner over here,” DeShazer said.

In fact DeShazer says in the last three years, two students have been hit by cars, but thankfully not seriously injured.

“It's not just our school. You have Carmen High School up the street and they have probably 50 kids that cross that same intersection where the accident happened, to get on the bus right there,” DeShazer said.

Right now a teacher helps kids cross the street at the end of the day, but DeShazer wants something more permanent.

“Every school that's on a remotely busy road should have school signs and should have crossing guards,” DeShazer said.

Ald. Caviler Johnson represents the area and says he is ready to help DeShazer make it happen.

“We can look at those things and work to make sure we get some signs up there and identify that area as a school crossing area,” Ald. Johnson said.

“Some people are in such a hurry to get where they're going that they're willing to risk not getting there at all,” DeShazer said.

Deshazer plans to contact Ald. Johnson Wednesday to discuss the options. Meanwhile Ald. Johnson already planned to bring up another crossing guard issue at Thursday’s Public Safety Committee meeting and may add this issue to his agenda.