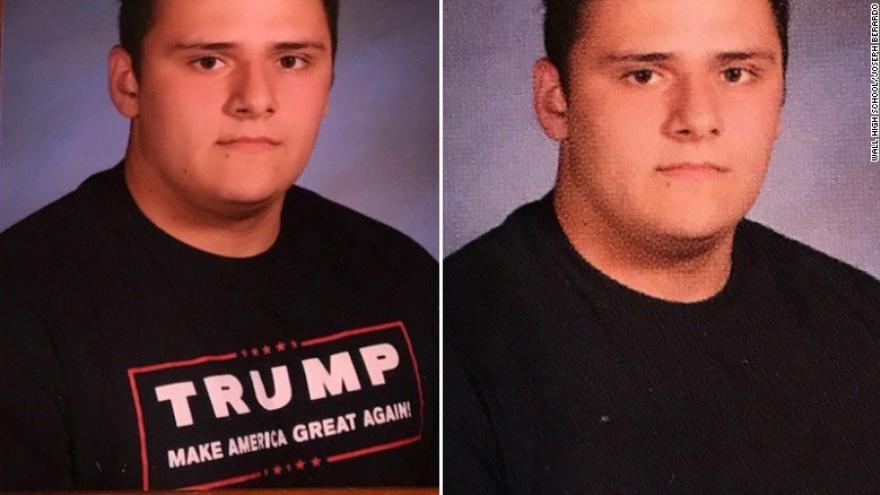 (CNN) A New Jersey high school will issue new yearbooks after pro-Trump slogans and logos were removed from photos that some students submitted.

The new yearbooks at Wall Township High School in Wall, New Jersey -- with the original, unaltered photos -- will be available for students to pick up in about two weeks, Cheryl Dyer, the superintendent of Wall Township schools, said in a letter to students and parents.

The shirt of one student, Grant Berardo, was digitally altered to remove the "TRUMP: Make America Great Again" lettering on his shirt. In a letter to students and parents on Thursday, Dyer said the words were removed intentionally.

"I cannot allow the intentional change that was not based on dress code to be ignored," Dyer said, "and I take responsibility for the actions of those who are employed here."

A Donald Trump logo also was missing from junior Wyatt Dobrovich-Fago's vest. Dyer said this was not done intentionally and occurred when the original photo was resized for the yearbook.

Dyer said neither she nor the school's administrators were involved in the alteration of the photos.

Also a quote by President Trump was removed from Wyatt's sister Montana's freshman class president photo. Montana had submitted the Trump quote, "I like thinking big. If you are going to be thinking anything, you might as well think big," to appear underneath her photo. It was unclear if the quote removal was intentional or an accident, Dyer said.

The superintendent said she was disturbed by what happened and felt that re-issuing the yearbooks was the best solution. She apologized for the mistakes, both intentional and unintentional, and promised to institute a system of checks and balances to make sure such issues don't happen again in future yearbooks.

A teacher who advised the yearbook staff was suspended. Dyer hadn't identified the teacher.

When the outcry over the altered photos began, Dyer had sent a letter to parents last week, saying she was investigating the matter.

"There is nothing in our student dress code that would prevent a student from expressing his or her political views and support for a candidate for political office via appropriate clothing. Rather, I applaud students for becoming involved in politics and for participation in our democratic society," she wrote.

"The high school administration was not aware of and does not condone any censorship of political views on the part of our students. This includes statements that they might make or clothing with references to candidates for public office that they might wear."

The school's dress code does prohibit references to illegal activity such as use of drugs, alcohol or weapons, she noted.

Donald Trump was not completely removed from the yearbook. One page mentions the 2016 presidential election between him and Hillary Clinton.