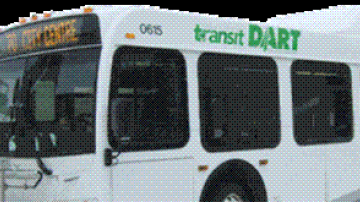 (CNN) -- A Saskatoon driver who stole a city bus and bumped into two other vehicles won't lose his license, police in the Canadian city said.

That's because the alleged culprit is only 9 years old.

Police spokesman Sgt. Ryan Smith said the boy took the empty bus Saturday morning from near the Saskatoon Transit maintenance center, where it apparently was left idling on the street.

The boy drove about three blocks through a residential area, making at least two right turns, and had to stand up because his legs weren't long enough to reach the pedals, Smith said.

Steve Pasqualotto, a reporter for CNN partner CBC, said said he was driving down Idywyld Drive, a busy thoroughfare, when \"my wife looked out her window and saw a city bus and said, 'There's a boy driving that bus.' \"

The bus bumped into a pickup truck and another city bus and came to a stop, Smith said.

Pasqualotto said he anxiously waited to see the driver. The bus door opened and \"out comes this 9-year-old boy in his pajamas,\" he said.

Police soon arrived. Nobody was injured.

The child won't be charged with any crime because he's too young to be arrested under Saskatoon law, Smith said. He was sent home to his family.

The bus had a cracked windshield and a broken mirror. Smith said the pickup truck was a total loss.

Why did the boy decide to start driving the bus? Smith said he doesn't know.

Saskatoon is a large city in the prairie province of Saskatchewan.