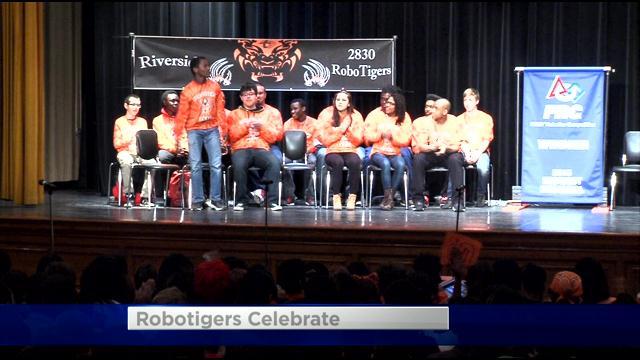 Despite the setbacks they've always had the eye of a robotiger and now the Riverside University High School Robotics Team is headed to the FIRST Robotics Competition National Championship later this month.

On Tuesday the school held a big pep rally that was attended by Mayor Tom Barrett.

Members of the team talked about the rags to riches story of the team which began about seven years ago in the classroom of the math teacher.

\"From there we worked in a workshop in the basement,\" recalled Senior Hasan Hayder \"And for two summers in a row we we're flooded out. So the robotics team was hit really hard. We lost everything those two summers.\"

Now enjoying their new title as regional Midwest champion the team is officially known as Team 2830 but call themselves the Robotigers as a play on their engineering interest and school mascot.

\"It really speaks to the dedication our kids make to academic excellence,\" declared principal Michael Harris.

Over six weeks they developed three robots that can stack containers and place recyclables into a bin.

\"The game focused on how you can make robots efficient. A recycling center. So our robot this year kind of looks like a remote controlled forklift,\" explained Hayder.

Riverside senior and \"Robotigers\" team member Matthew Beecher has dreamed about what he and his teammates accomplished since he was a 9-year-old student participating in robotics at MPS' I.D.E.A.L. School. \"Knowing about the tournament for so long, and not just getting to go but also getting to compete - it's absolutely great. I haven't slept the last few nights,\" Beecher said days after the regional win.

MPS Superintendent Dr. Darienne Driver attended Tuesday celebration. \"I've never been so proud to be wearing orange and black,\" she said to a standing ovation.

\"Now at the national level they have all these teams that have a gazillion dollars,\" warned Mayor Tom Barrett. \"But they don't have the heart and soul of Riverside High School. That's what they don't have.\"

For many years the team was regularly eliminated before the playoffs. But their teacher advisor Chris Levas and community mentors always encouraged them to go for it with every passing year.

\"Next to my daughter's birth and my wedding, it was probably the best experience of my life,\" Levas said in an MPS statement . \"It was just phenomenal to see.\"

Mentors came from GE Healthcare and Rockwell Automation and student mentor Erik Orlowski from the University of Wisconsin-Milwaukee.

The team is also supported by Harley-Davidson Motor Company, the Milwaukee School of Engineering and local philanthropist George Mosher.

Team sponsors, the school, the Riverside University High School Foundation, Tri-City National Bank, MPS and individual donors through a gofundme page are funding the trip to the championship.