Reward offered for information on mail carrier beating and robbery 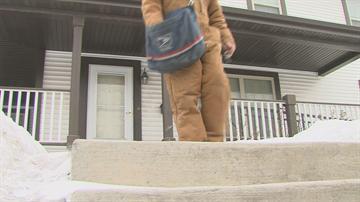 MILWAUKEE -- US Postal Inspectors want your help in finding two suspects accused of attacking one of their carriers in broad daylight.  Up to $10,000 in reward money could go to anyone who helps track the suspects down.

\"Until now it's been a pretty good neighborhood,\" north side resident Mildred Navedo said.

That changed for Navedo Monday afternoon.  Two men threw a letter carrier down on a porch, beat him and fractured his nose after 3 p.m. not far from Navdeo's home on 34th and Hampton.

\"That's very petty for whoever would think of doing something like that to a mailman,\" Navdeo said.

The suspects are described as young black men, both about six feet tall.  One may have a tattoo on his face and neck while the other was wearing a winter mask.

\"We are actively looking for help from the community and we have received several tips from people in the neighborhood  already,\" U.S. Postal Inspector Faith Kohler said.

The robbers left behind the letter carrier's wallet, keys and cell phone, only  taking the mail satchel, which was empty because the carrier was at the end of his route.

\"We work these cases until they're done and I have to tell you, we've had very good successes in general,\" Kohler said.  \"I think most  people want their letter carriers to stay safe.\"

Postal inspectors hope more people sign up for the Carrier Protection Program after this incident.  Started in 2009, people can volunteer their homes as places for letter carriers to stop if they don't feel safe.

\"We're providing a service,\" USPS Customer Relations Supervisor Kevin Goodman said.  \"A lot of the guys that are out there doing the robbing and mugging, I'm sure we may have  had a letter for them at times, so it's a bad deal.\"

The postal service couldn't say if a carrier protection home would have prevented the robbery, but it may have helped.

\"Whatever it is, we should be at their service,\" Navedo said of postal workers.  \"They're always at ours.\"

Anyone with information is asked to call the US Postal Inspectors at 877-876-2455.  CBS-58 was told the letter carrier is recovering and hopes to get back to work Monday.