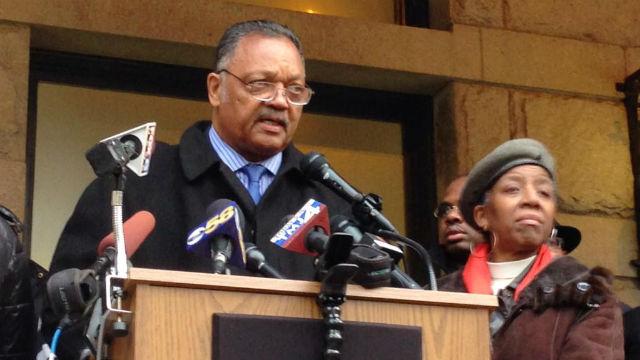 A large crowd of demonstrators demanding justice for Dontre Hamilton, an unarmed Black man shot to death at Red Arrow Park on April 30, marched from the park to the federal courthouse in Downtown Milwaukee.

Dontre Hamilton's family led the march with the Coalition for Justice.

\"We are the leaders of a new civil rights movement,\" said Nate Hamilton, Dontre's brother, \"we are the future, we are the beginning.\"

Nate introduced the Rev. Jesse Jackson who came in from Chicago for a day of meetings with local leaders and the Coalition for Justice.

\"The one thing worse than oppression, is to adjust to it,\" said Rev. Jackson, \"we must never adjust and you must never explain to your self why it's alright.\"

Rev. Jackson cited Milwaukee as the worst city in America for Black families. He cited in equities in test scores at school, access to healthcare, and jobs as he addressed the crowd outside the federal courthouse.

Rev. Jackson also made a similar references during an evening service for Dontre at Holy Temple Firstborn Missionary Baptist Church.

\"Poverty is a weapon of mass destruction it,\" said Rev. Jackson \"racism is a mental disease.\"

Rev. Jackson also referenced Milwaukee as a \"minority majority city,\" mostly Black Hispanic and Asian. He emphasized the police must represent the population.

As the US Department of Justice prepares to look at Dontre Hamilton's case, the shift turns from justice for Dontre, to justice for all Black families who faced discrimination each day.

\"When we are not respected and educated properly that's what brings violence about,\" said Nate.

Nate says this is just the start of a long fight for his family and the Coalition for Justice, the eventual goal is to push for legislative change.