Restoration Project Will Reduce Flooding in the Kinnickinnic River 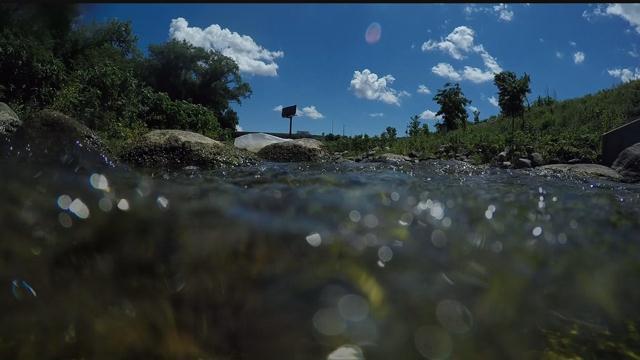 The Milwaukee Metropolitan Sewerage District (MMSD) is heading a multi-million dollar project to revitalize the Kinnickinnic River, which flows into Lake Michigan.

In the 1960s, concrete walls were built on the sides of the river. However, this caused flooding issues for hundreds of Milwaukee residents.

Patrick Elliott is senior project manager at the Water Course Division at MMSD. He said they’ve identified about 600 homes in the high flood zone. MMSD has bought 75 of those homes.

“These concrete streams that were put in, were to pass through water as quickly as possible and it’s very dangerous in residential areas and we’ve had several deaths in the KK,” Elliott said.

Residents can get a sense of the upcoming changes. On one side of the 6th street bridge, there are concrete walls and on the other side, the concrete walls are gone and there's more vegetation and fish.

They were able to fix that side a few years ago. MMSD also plans to widen the river from 50 feet to 200 feet.

“It slows the water down,” Elliott said. “It provides a safer environment to repair a river corridor that runs in the backyard of people’s homes.”

“At the end of the day, we can come up with something that the community truly appreciates,” he said.

MMSD has partnered with the Sixteenth Street Community Health Centers to get the community involved in this process.

The KK River flows into Lake Michigan, which means its part of Milwaukee’s drinking water source.

Bogue said the health of the community goes beyond a doctor’s visit. Since the KK River runs through their patients neighborhoods in Milwaukee’s southside, it impacts their health and quality of life.

"We do have a series of five workshops,” Bogue said. “It's our environmental workshops to teach people about the river and flooding and how to use these new green spaces."

The project will approximately cost $100 million. The funding will come from tax payers and they're looking for state and federal funds.

“Sixteenth Street understands that an investment like this can really bring other changes in the community,” she said.

"As a resident, whyyou should care? This space is going to change dramatically over the next coming years, this is a generational change," Bogue said.

The project is three miles long from 6th Street upstream to Jackson Park.