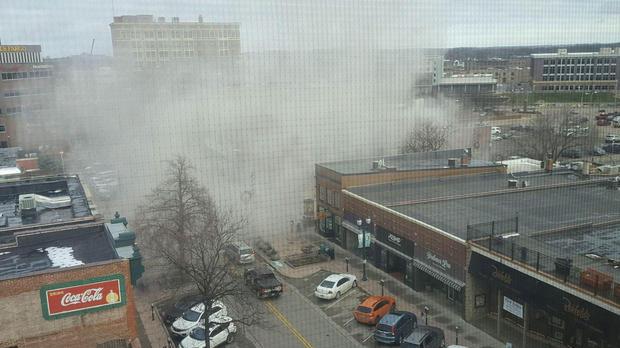 (CBSNews) SIOUX FALLS, S.D.  - Rescue workers have pulled a 22-year-old woman from the rubble of a collapsed building in a South Dakota city.

Sioux Falls emergency manager Regan Smith says the woman is “alive and well,” but does have injuries to her leg. Smith says she has been taken to a hospital. Workers had communicated with the trapped woman before her rescue, reports CBS affiliate KELO in Siux Falls.

He says rescue workers continue to search for another person trapped in the rubble. Fire officials have said that person is a construction worker.

Mike Klatt, 39, was getting coffee across the street when he saw bricks coming down from the top of the building. The bottom gave way, and it collapsed into the street, he said. Klatt said people ran out of the coffee shop to see if anyone was trapped, but nobody was visible.

The collapse happened around 10:30 a.m. local time near the corner of East 10th Street and South Phillips Avenue in Sioux Falls. Part of the Eastwold Smoke Shop building, which formerly housed the Copper Lounge, fell down into the street and parking lot. The building that collapsed Friday morning was being remodeled.