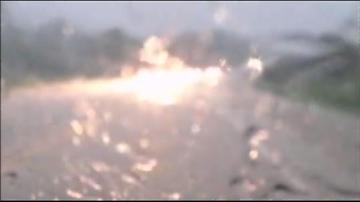 WAUKESHA-It was raining so hard at some points Monday night that traffic was forced to slow down considerably on I-94 and other highways in Waukesha County.

While there have been a few breaks in the rain throughout the evening, the heavy downpours did cause flash street flooding in the city of Waukesha along with high winds and lightning.

\"It's been pretty crazy,\" resident Jennifer Michaels told CBS 58 News. \"Just the rain and everything and all the thunder and the flash flooding. Kind of concerned me a little bit. Luckily we don't have any water in our basement, yet.\"

Residents say parts of the Fox River is over its banks near Moreland and Madison Streets near downtown Waukesha and some backyard flooding .