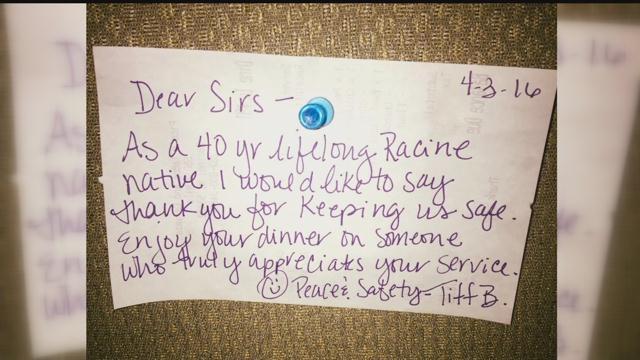 A show of support at a time where many police officers are fearing for their safety and the public backlash from others misdeeds.

Racine police say they're used to getting "thank you's" when they're out working the streets.

But it's been an extra special week for them.

"That's something lost in our society today, to have that extra dose of kindness," said Tiffany Baumstark.

An extra dose of kindness that Racine native Tiffany Baumstark tries to put back in the community everyday through random acts of kindness.
Her latest happened on Sunday at Pico's Tacos and Cervesa's when she was picking up some food.

"After I ordered two Racine detectives came in and sat parallel to me. And I just really felt compelled to buy their meal," said Baumstark.

She paid their tab and left a note one that has gone viral in the community.

"Because of my dad being a firefighter, as families its difficult when your family walk out the door everyday and there's uncertainty. So it meant a lot to me," said Baumstark.

Just days earlier another dose of kindness when Paige  Weslaski and her mom Claire dropped seven party pizzas with all the fixings at the police department.

"I think police appreciation week is coming up, but I couldn't wait. I was like I'm just going to do it now why wait until May to do something nice," said Claire Weslaski.

Racine Police issued a statement saying "what these acts show is that our efforts in the community have not gone unnoticed...It's a result of our direct efforts...In community engagement."

And though all parties involved say they didn't want recognition they hope their acts will inspire others.

"If they're having a bad day maybe that little bit can make them remember its all good and people really do respect what they're giving to the community," said Baumstark.