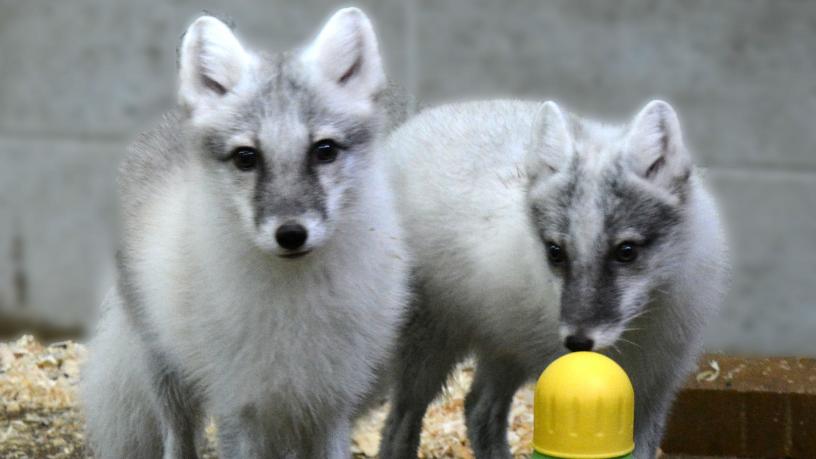 The Racine Zoo announced new additions to the zoo family this week. A brother and sister arctic fox duo named Echo and Luna were born May 20th, 2016 at the Great Bend-Brit Spaugh Zoo in Kansas. Echo, is known for making chatter and noise when he wants the attention of his keepers. Luna can be a bit more reserved, and will closely watch as her brother interacts with those around him. Luna is currently lighter in color compared to Echo, but both are very playful high-spirted animals and just make a fabulous addition here at the Racine Zoo.

The arctic fox is an incredibly well adapted animal that can survive frigid arctic temperatures as low as –58°F in the treeless lands where it makes its home. They are found throughout the entire arctic tundra including Alaska, Canada, Greenland, Russia, Norway, Scandinavia, and even Iceland. They live in burrows and, in the course of a blizzard, they may tunnel into the snow for shelter. They have beautiful white fur coats that act as camouflage blending them into the snow for protection.

As the seasons change so do their coats, turning a light brown or gray to help them to hide and hunt in their natural habitat.

In winter it is much harder for the fox to hunt prey so they tend to follow polar bears. After the polar bear has finished with its kill, the arctic fox will move in and finish what scraps are left.

One of the most unique behaviors of arctic foxes is how they hunt. They have incredible hearing aided by their wide, front-facing ears, which allows them to locate the precise position of their prey beneath the snow. They are also known to eat vegetables when available. The fox’s tail, much like a cat, is to aid in balance as well as to use for warmth and coverage.  “They are bundles full of energy with great personalities. The Racine community is going to fall in love them, just like we have.” said Theresa Donarski, Curator of Conservation & Animal Care. “The animal care staff is currently working with both of them to learn their manners when interacting with staff; to sit when taking food by hand, or when getting attention, next will be target training and scale training. Long term goals are harness training to take them out on programs because they will make great animal ambassadors for their species.” continued Theresa. We are proud to have the arctic fox join the Racine Zoo. We know they will make your time visiting the Racine Zoo exciting and one to remember, as they race around playfully in the snow.

We will also be swapping out two of our male African penguins for two males from the new Zoo located in Green Bay, WI. Both of the penguins were hatched here at the Racine Zoo, Mr. Bill was born January 7th, 2013 and Blue/Green was born on December 24th, 2001. “The purpose of switching them is part of the SSP (Species Survival Plan) recommendations for what is best for the species and the breeding recommendations. This will allow new breeding pairs to be set up at the NEW Zoo in Green Bay and for us to continue to have our breeding pairs here at the Racine Zoo.”  Theresa commented.

The two male penguins that we will be receiving are Stanley and Dassen. Stanley was born October 11th, 2009 at the Richmond Zoo in Moseley, VA and then moved to NEW Zoo in Green Bay when he was just 1 ½ years old. Dassen was born June 29th, 2004 at the Pueblo Zoo in Pueblo, CO and moved to NEW Zoo in 2006.

We are sad to see our penguins leave but in turn, very excited to gain and contribute to the SSP program. For more information about SSP you can find them on the web at www.aza.org. We are thrilled here at the Racine Zoo for this upcoming winter. We hope you can stop on out for our Boo at the Zoo Event this Saturday, Oct 29th, to say “Hi” to our new additions and to their keepers. The artic foxes will be located in our Norco Aviary, we will see you there!