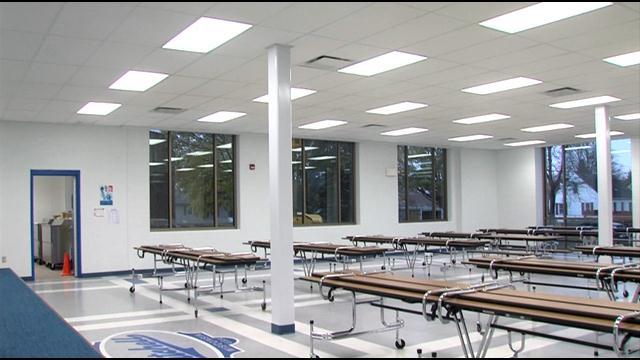 Mitchell Elementary School students now have a place for nutrition and play they can call their own. Construction on a new multi-purpose room and gym is complete.

The original section of the school was heavily damaged in an early morning fire in February that ripped through the building. The Racine School district demolished the structure weeks later, paving the way for a new beginning.

\"It's been a long process with a lot of hard work,\" said Bryan Arnold, building and grounds director. \"Lots of long days and coordination.\"

The coordinated effort turned out to be a success, even though the district used an uncommon process called fast track construction. Arnold said that means the district did not have a full design set when they started getting bids for the project.

He said that worked out in their favor. It took about four months to re-build what is now a two-level cafeteria and gym. An elevator is also a part of the modern structure that's designed to keep any future fire from spreading.

The fire alarm and electrical wiring have been upgraded. The construction also included installing a three-hour fire wall.

\"It's a solid concrete wall that goes from the roof deck all the way to the basement,\" Arnold said. \"It's one continuous system, so it would be very difficult for fire to penetrate that concrete barrier.\"

The three-hour fire wall is not readily visible just looking inside the school's new addition, but it lies within the doors of the cafeteria.

\"The doors are tied to the fire alarm system, so that if the alarm goes off, they would shut automatically,\" Arnold explained. \"There are also smoke detectors on either side of the doors.\"

The fire wall controls a fire by keeping it contained in one place. Fire sprinklers, on the other hand, control a fire with water and help put the flames out.

Arnold said, \"sprinklers were not practical for this construction. We'd have to bring in a whole new water service to the building.\"

Captain Jeff Perkins with the Racine Fire Department said it's an ongoing battle to get sprinkler systems installed everywhere. He said a fire doubles in size every minute.

\"Sprinklers are the most effective device or most effective system out there,\" he said. \"I understand it's very expensive and the code doesn't require it in all circumstances.\"

Arnold said very few of the district's buildings have sprinklers because of code regulations at the time they were built.

CBS 58 asked Perkins if Mitchell School is at more risk without sprinklers in the new construction area.

\"They're certainly not at more risk than they were prior,\" he said. \"The way the building's constructed is a factor in their favor.\"