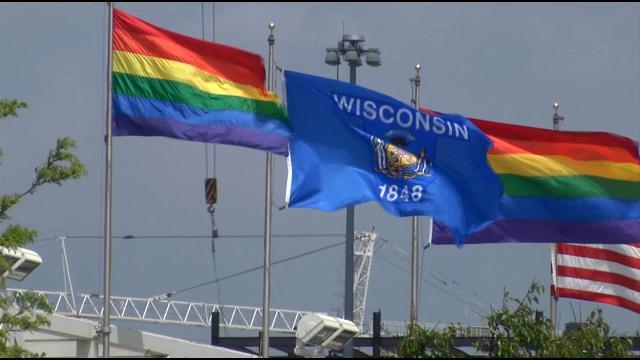 Rainbow flags, rainbow archways and rainbow merchandize popping up on the Summerfest grounds make it clear: Everyone is welcome this weekend.

But as workers finished setting up for the 28th annual PrideFest, Jessica Baker planned to look for some other signs of acceptance in places she says they've been lacking.

\"Basically, people were made to feel uncomfortable and it got tense,\" Baker said outside the grounds' main gate Thursday morning.

PrideFest had a record year in 2014, passing 30,000 visitors for the first time ever. The opening day also coincided with a federal judge ruling Wisconsin's gay marriage ban unconstitutional.

But Baker, who identifies as a trans woman, says people got into verbal fights during PrideFest last year over who used which bathrooms.

PrideFest policy has always allowed people to choose the restroom they prefer. But Baker says some people took exception to transgendered people making those choices.

\"To have an actual incident like that at PrideFest... It's a sad irony,\" Baker said.

PrideFest organizers say no one was ever physically assaulted last year, but they were aware of the conflicts.

\"The perception of safety issues is dangerous enough and why we took this quite seriously,\" PrideFest communications director Michail Takach said.

This year, you'll find the bathroom policy posted at the entry gates. The board of directors also added two gender-neutral restrooms to the one which was on site before. The board agreed to mark those restrooms with \"clear, visible signage\".

\"We can't predict what people do,\" Baker said. \"Nobody can. I'll be saddened and disappointed if it does [continue this year].\"

The group \"Genderqueer Milwaukee\" will also be around for anyone who would feel safer using the bathroom of their choice with an escort.

PrideFest opens Friday at 3 p.m. You can find more info about the festival, including the location of gender-neutral bathrooms, via the website here.