KENOSHA, Wis. (CBS 58) -- President Trump has made Wisconsin a priority in this election, and spent his last day campaigning here.

His final stop in the state is a city he visited not long ago during the unrest following the shooting of Jacob Blake.

Almost 100 million Americans have voted already, and the president is counting on a big turnout Tuesday.

But it's not just about him -- Republicans up and down the ticket are struggling, and these rallies help.

"I want to paint you the picture if the Democrats run the table, we don't want to think about that," said Senator Ron Johnson (R-WI).

The president told supporters that Wisconsin put him over the top four years ago, and he's counting on that happening again this year.

"Get your friends, get your family, get your neighbors, get your coworker, grab your boss by the tie and say come on boss, get out and vote," Trump said.

From here, the president is headed to Michigan, another very important state for the president, and his final campaign stop.

KENOSHA, Wis. (CBS 58) -- It's a full house in Kenosha Monday night, Nov. 2, as hundreds of President Donald Trump supporters gathered in Kenosha for a rally just hours ahead of Election Day.

Wisconsin is a critically important state for Pres. Trump and it's telling that he would spend his last night there.

Supporters wait for the President who will spend part of his final night in #Kenosha. His final rally in WI. We’ll have more on @CBS58 at 9 & 10. pic.twitter.com/xqyEh2oOgE

The last time Trump was in Kenosha was during the unrest following the Jacob Blake shooting.

Pres. Trump wants to fire up his base and his supporters are excited to see him.

"I like being around like-minded individuals. I think it also shows the importance of this state. It’s wild, it’s going to be very wild in there, so I’m going to see a lot of people going crazy so it’s definitely exciting," said a Pres. Trump supporter.

Pres. Trump is set to speak at 7 p.m. at Kenosha Regional Airport.

Trump is set to speak at Kenosha Regional Airport at 7 p.m.

Supporters were lined up hours before Trump's visit.

Nearly hundreds of Pres. Trump supporters have parked and will be getting on shuttles to head to the rally in Kenosha at 7:00 P..M. Doors open at 4:00 P.M. @CBS58pic.twitter.com/7fj49vooB5

Ahead of his Wisconsin rally, Pres. Trump will make stops in North Carolina, Pennsylvania, and Michigan.

"I just think it’s really important to especially let the President know that we support him. We know that he supports us and he’s been fighting really hard and it’s been a tough year for everyone to say the least and you know to be able to come out here and show our support for the President," Michael DeWyze, Trump supporter. 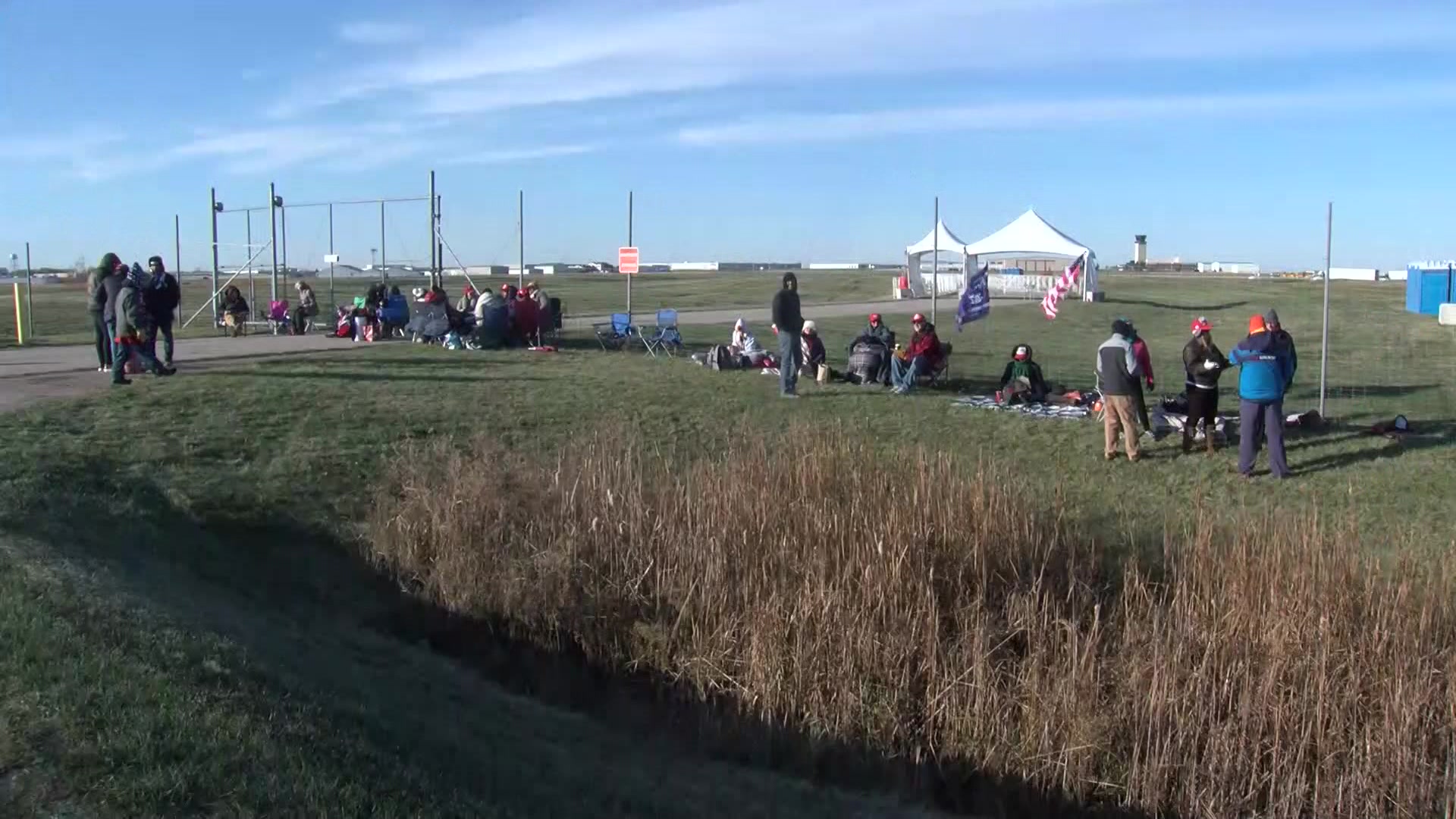 "As the coronavirus continues to surge, Wisconsinites are bearing the brunt of President Trump’s failure to lead.

Back in February, President Trump knew the dangers of this virus. But instead of telling the American people the truth, he lied to us, froze, and tried to wish it away. And now, more than eight months into the pandemic, the President still has no plan to get the virus under control. We see the costs of President Trump’s inaction in the families who will never again be whole — the empty chairs around dinner tables, the folks who’ve lost jobs and are barely hanging on.

When I’m in the Oval Office, I will stand with Wisconsin, and I will listen to the experts, trust the science, execute on my plan to get the virus under control, get our schools and small businesses safely back open, and speak the truth to the American people. There’s so much at stake in this election, and that’s why Wisconsinites have to get out and vote on Tuesday. Together, we can begin to restore the soul of this nation we all love."