Power still out, not enough food, Puerto Rico in desperate need of help after Maria 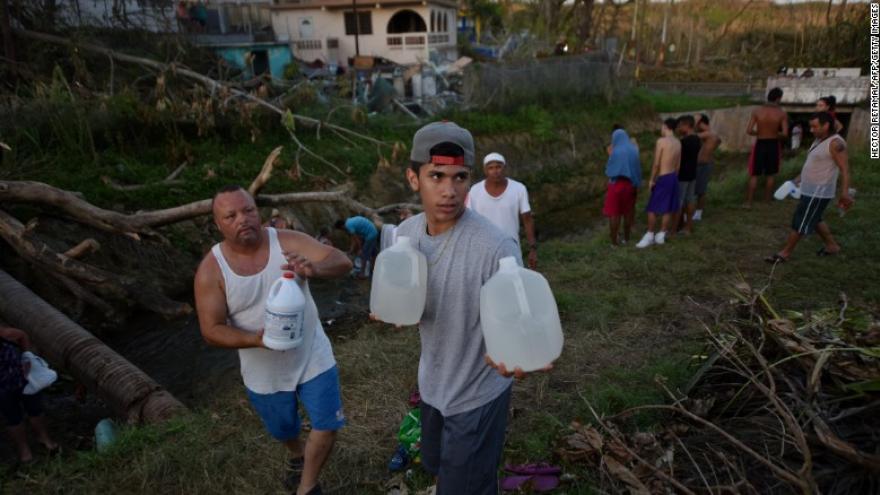 (CNN) After a week of misery, millions of Puerto Ricans are still suffering in primitive conditions without power, water or enough fuel.

About 97% of the island's 3.4 million residents are still in the dark Wednesday, one week after Hurricane Maria slammed into the Puerto Rico, Gov. Ricardo Rosselló said. About half of the residents do not have running water.

And there's nowhere enough food to go around. In the town of Utuado, Lydia Rivera has started to ration crackers and drink rainwater to keep her two grandchildren alive.

The hurricane killed 16 people in Puerto Rico, 27 in the island nation of Dominica and one in the US Virgin Islands. But the US recovery efforts in Puerto Rico have been markedly different from the recent responses to other Americans in hurricane-stricken Texas and Florida.

With supplies running out, many Puerto Ricans are collecting water from mountain streams.

Harry Torres said the water is all they have for cleaning and drinking until help comes. They've heard on the radio that trucks loaded with supplies from the Federal Emergency Management Agency have arrived on the island.

"We haven't seen any," Torres said.

Some help is on the way. On Wednesday, a plane carrying 3,500 pounds of water, Army meals ready-to-eat, diapers and other supplies will head from Miami to Puerto Rico, said Rob Brisley, spokesman with US Customs and Border Protection.

The plane, which usually carries out intelligence missions, will travel back to the United States with 28 family members of federal employees, he said.

"We are getting help from the federal government, but this is an unprecedented set of circumstances," Rosselló said Wednesday. "We want to make sure that we recognize that a lot of resources are coming in. They are coming in by air or by boats. But they are starting to execute."

Puerto Rico and the US Virgin Islands have seen fewer personnel since Hurricane Maria hit than Texas and Florida did during recent hurricanes in those states.

In a tweet Monday, FEMA said more than 10,000 federal staff members were on the ground in Puerto Rico and the Virgin Islands assisting search-and-rescue and recovery efforts.

President Donald Trump has announced he will visit Puerto Rico next Tuesday -- nearly two weeks after Maria struck the US commonwealth. He's been criticized for his response to Puerto Rico, compared with Texas and Florida -- two states he visited within four days of Hurricanes Harvey and Irma.

On Tuesday, Trump said the recovery was more difficult in Puerto Rico because of its geography. FEMA Administrator Brock Long added that the limited operations at Puerto Rico's international airport were making it difficult to move resources into the area.

Lack of diesel leads to deaths

With nearly all Puerto Ricans still without power Wednesday, the lack of electricity and fuel have yielded dire consequences.

At a hospital in San Juan, two people died in an intensive care unit after it ran out of diesel, San Juan Mayor Carmen Yulín Cruz said.

Residents are relying on generators to keep appliances such as air conditioners, medical devices and refrigerators running.

At the San Jorge Children's Hospital in San Juan, 12 children depend on ventilators to survive, but the hospital has only a limited amount of fuel for generators, said Domingo Cruz Vivaldi, the hospital's executive director.

The hospital is the largest private children's medical center in the Caribbean. When the hospital ran out of diesel Monday, the ventilators had to run on batteries for hours until another hospital offered them fuel.

The hospital is working to secure more gas, he said, because that diesel will only last for about two days.

'People are starting to get desperate'

Before sunrise every morning, dozens of people hauling red plastic gas cans start lining up at gas stations. They need fuel to power their cars in case of an emergency or to keep generators running at home.

Some wait for up to six hours armed with lawn chairs and umbrellas.

"If the gasoline arrives, it will fix our problems," Utuado Mayor Ernesto Irizarry said. "People are starting to get desperate,"

At least 60 people have been arrested for violating the overnight curfew ordered by the governor to keep the island safe.

And 36 have been arrested for looting and theft in Humacao, Caguas, San Juan and Bayamón, said Michelle Hernandez, superintendent of the Puerto Rico police.

While Puerto Ricans await more government help, some companies and a Florida college are stepping up.

And Miami Dade College will offer in-state tuition to displaced college students from Puerto Rico, the college said via Twitter.

Rosselló said he hopes the kindness showed by Puerto Rico during Hurricanes Harvey and Irma will be returned.

"The people know that Puerto Ricans are proud US citizens," he said.

"After Irma, we helped out others -- about 4,000 US citizens that were stranded. We gave them shelter and food. During Harvey, we sent out resources to Texas as well. ... And now it is time to take a quick decision and help out Puerto Rico as others have done."