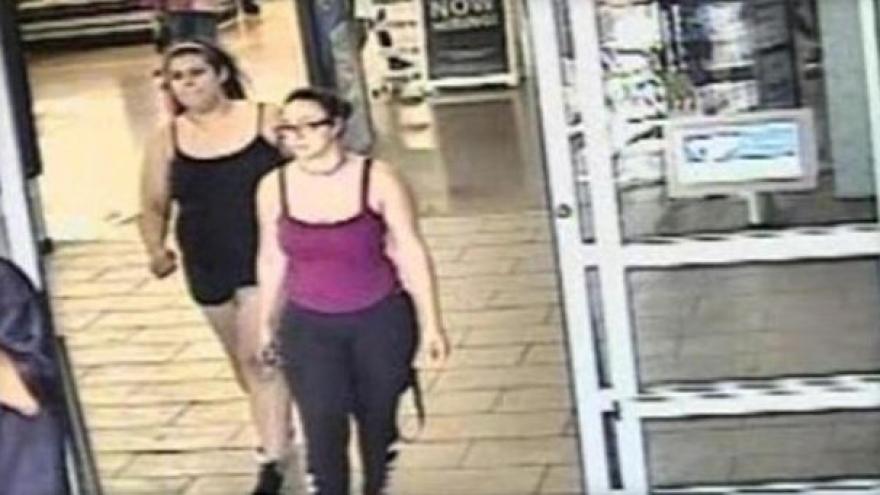 (CBSNews) -- Bowling Green, Ohio police are looking for two women who were spotted with the subject of a nationwide manhunt for his alleged involvement in the kidnapping and rape of two teenagers, reports CBS Toledo affiliate WTOL-TV. Police say the women were seen with David Ramos Contreras, one of three suspects still on the lam. A fourth was captured.

The women were caught on surveillance video with Contreras at a Walmart in Holland, Ohio on June 30. Police say the women gave Contreras a ride in a light-colored vehicle.

Along with Contreras, authorities are searching for men whose apparent identities are Arnulfo Ramos and Juan Adiel.

Authorities say the suspects aren't U.S. citizens and are reported to have phony ID cards and documentation. Contreras is said to be from Mexico.

Police say Adiel had a U.S. Permanent Resident ID card out of Fellsmere, Florida, with a listed birth date of Sept. 13, 1998, but the card was later determined to be fake.

Authorities say the four are accused of sexually assaulting and holding 13- and 14-year-old sisters against their will on June 28 at a Days Inn where the men and victims' mother were also staying.

Police say the girls got away from their captors, and their mother and stepfather rushed them to a hospital to be examined.

Search warrants were served at the Days Inn and, based on evidence uncovered, detectives were able to identify the four suspects.

Simon Juan Thomas, 24, of Guatemala, has been arrested and charged with unlawful sexual conduct with a minor and is being held on $50,000 bond, with 100 percent required.

Nationwide warrants are out for their arrests.

The men were working in the Bowlilng Green area, two as dry wallers and one at Greenline Foods.

Bowling Green police tell WTOL it's been a tough case for investigators personally -- but one they're determined to see through to the end.

"You know, these are 13 and 14 year old girls and they are your daughters, so it's very difficult and as officers we need to stay objective to investigate the case. However, a lot of us have children," said Bowling Green Police Major Justin White.