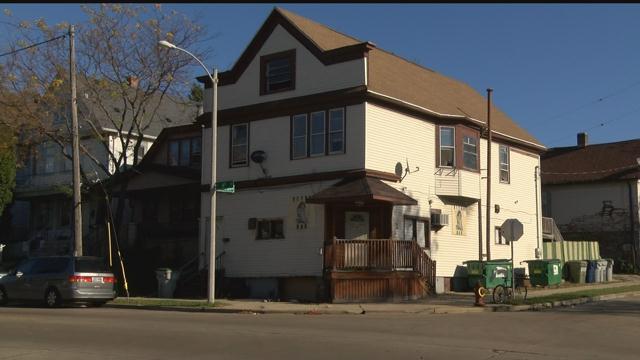 Milwaukee police are on the hunt; trying to find the getaway driver who started a dramatic chain of events. MPD bicycle officers wanted to talk to a man who was parked illegally on 15th and Lincoln.

The guy sped away, hit one of the cop's bikes, and someone's car. The whole thing ended when the getaway car slammed in to a bar at 6th and Harrison.

"He got out, police pulled up. They went to the other car that was hit. The guy was standing here, then he ran through my yard, through here, came back out and was sitting here while the police were here," said David Ross, who lives right next door to Reyna's Bar.

Ross saw it but Jose Laom felt it. Around 8 PM  he said he felt the whole building shake as bricks went flying.

"I was in the basement when this happened, like 10 feet from the wall," said Laom.

There were at least 3 or 4 people still in here when the car hit the tavern. Jose ran from the basement and told the people to get out, fearing there was a gas leak.

By that time those guys in the bar were out too, looking at what happened. Another witness posted a video to the bar's Facebook page. You can see the suspect's crashed car which police say had a gun inside.

"Those careless people; they just hurt someone else, and he just ran away," said Laom.

A knocked over gas meter, a hole in the wall of the building; debris was still everywhere nearly a day after the crash. But Jose says that's not the biggest issue for his girlfriend who owns the bar.

"She lost one night of business. Saturday is one of the busiest nights of the week, so she doesn't have any income," said Jose.

The building has been deemed safe and while they rebuild brick by brick, they're staying open.

"Nothing is going to slow us down," said Jose.

Neither the officer who was hit on his bike nor the driver of the other car hit was seriously injured in this crash.