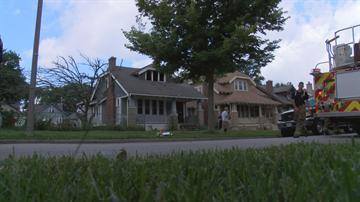 MILWAUKEE -- Fire ripped through a rental property in uptown Milwaukee Sunday morning, just blocks from District Three Police headquarters.  What firefighters found inside has the owner on edge.

\"I got three phone calls back to back and I finally answered one of them and they said my  house is on fire,\" owner Carmel Scaife said.

Scaife rushed over to her rental property on 47th and Meinecke around 10 a.m.  When she got there, the Milwaukee Fire Department had the fire out and the news wasn't good.

Scaife had been working to renovate the home and prepare it for tenants, so no one was inside at the time.  But she worries about what police told her crews found inside.

\"There was writing on the walls saying, 'You fired me, I'm going to fire you.  Your daycare is next,'\" Scaife said.  \"I don't know what else because [police] didn't say the rest and they won't let me  in.\"

Scaife says she recently had to let some of the employees from her childcare center go.  Now she thinks those former employees are looking for revenge.

Firefighters found the back door open, but they wouldn't confirm or deny if someone intentionally set the fire, only offering that it's under investigation.

\"My safety, my daycare, my children in my daycare, my staff,\" Scaife said.  \"I'm worried about all of that  now because i don't know what's next.\"