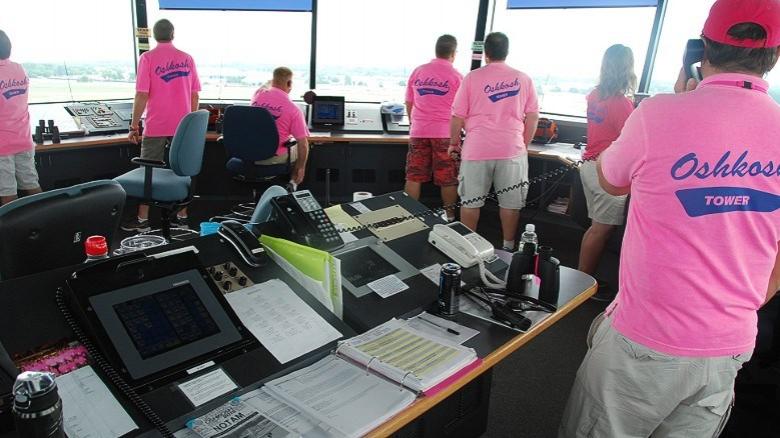 OSHKOSH, Wisconsin (CNN) -- This week, the world's busiest air traffic control tower isn't in Atlanta or Chicago or London or Dubai. It's in the tiny town of Oshkosh, Wisconsin.

At least that's what the gigantic banner plastered across the tower at Wittman Regional Airport says.

For seven days every year, Wittman plays host to organized chaos in the skies. It's the Experimental Aircraft Association AirVenture aviation festival, a fly-in celebration better known as Oshkosh.

About 10,000 aircraft of all shapes and sizes fly in. Then they fly out.

For those who've not experienced Oshkosh, you have to understand: During the day, dozens of planes are flying here.

And someone has to keep tabs on them. Like the song says, \"You gotta keep 'em separated.\"

Traffic is so heavy during Oshkosh that the FAA says it rivals two of the world's busiest airports, Chicago O'Hare and Atlanta's Hartsfield-Jackson.

So the Federal Aviation Administration brings in the Pink Shirts.

You could call them wizards of spatial relations. Armed with binoculars, hand-held radios and bright pink golf shirts, about 85 experienced air traffic controllers volunteer every year from airport towers across the nation to push the planes coming in and out of Oshkosh. They stay busy wrangling as many as 3,000 separate airport operations daily.

How do they do it?

Part of their secret sauce is creating teams. Some teams focus on arrivals; others just do departures.

Then, to keep themselves sharp and thinking about the big picture, the teams exchange roles.

Arrivals are handled by pink-shirted controllers in Oshkosh and a temporary platform at a nearby airport in Fond du Lac.

Atop the Oshkosh tower, surrounded by windows, about a dozen controllers are spread out across the room, each watching an assigned area of the airfield.

At one point, a twin-engine plane is approaching for a landing on the wrong runway. A controller notices, and the pilot is quickly advised to gain altitude, change course and to land on the correct runway. Problem solved. Mission accomplished. Controllers move on to the next approaching plane.

Believe it or not, departures are coordinated on what amounts to tricked-out hay wagons called Mobile Operations and Communications Workstations, aka MOO-COWS. These aren't actual farm implements but rolling temporary air traffic control platforms strategically placed on the airfield. They're outfitted with coolers full of sandwiches and soft drinks to keep the workers going under the blazing sun. Atop those platforms, controllers with hand-held radios coordinate take offs for thousands of mostly small aircraft.

Because these folks are wearing their pink shirts, departing and approaching pilots will easily be able to identify them as controllers. They'll watch the controllers closely for hand signals and other visual cues.

\"It's very hands-on. So close. Right there. You can see it all,\" longtime Oshkosh controller and Air Traffic Manager Elaine Buckner said.

As I stand on this busy airfield with Buckner amid dozens of planes landing and crossing runways and taxiing for takeoff, it becomes clear what a supremely difficult job it is to keep track of all the moving parts for hours on end.

So many small planes are flying into the airport that controllers have very little time to line them up and get them safely on the ground. To deal with this, a special \"approach control\" station near the town of Fisk, about 6 miles southwest of Oshkosh, coordinates with pilots to line their planes up for landing before they close in on the airport.

The station isn't much more than a set of strobe lights, lawn chairs and a camper parked on a hilltop. It's here that pink-shirted controllers like Tim Kiefer communicate with pilots verbally and visually.

To save time, radio cross-talk between pilots and controllers has to be limited. So pilots are often asked to acknowledge controller commands by rocking their wings back and forth.

Kiefer spots a small approaching aircraft and grabs his microphone to call the pilot by saying her location.

\"On highway half a mile south of Fisk, rock your wings,\" Kiefer says. Immediately, the pilot acknowledges by wagging her wings.

\"Up the railroad tracks, keep your downwind inside the gravel pit,\" Kiefer says, advising her of a landmark to follow toward the airport. \"Where you from today?\"

\"Leamington, Ontario!\" she says with a smile in her voice.

\"Oh, wow, welcome to Oshkosh!\" Finally, Kiefer tells the pilot the radio frequency where she can contact the tower. \"You come on to the tower now, 118.5. Have a great day.\"

Another trick controllers use to deal with the massive traffic: big dots on the runways.

Stay with me here. It's kind of complicated.

Two incoming planes are in flight, approaching the airport, one behind the other. Controllers instruct the lead pilot to land in the middle of a runway, on a big dot. The trailing pilot is told to land precisely on the numbers that are painted at the beginning of the runway. Result: two planes landing one after the other on the same runway without running into each other. Witnessing it is like watching a well-choreographed ballet.

It all gets done as safely as possible because of the people in the pink shirts.

Daily airshow performances by aerobatic pilots add a layer of traffic coordination at Wittman. During each airshow, the tower is closed, and a \"show boss\" takes control of the airport airspace, under the watchful eye of an FAA official.

But, as with any massive air traffic location, accidents will still happen.

This year didn't pass without incident. A small single-engine plane crashed during approach to Wittman on Wednesday, injuring all five people on board. One was taken to a hospital. It's not known what may have caused the crash, but the FAA and the National Transportation Safety Board are investigating.

Buckner was on duty at the time of the crash. Typically, she says, \"we go into a different mode then. Our role then is to get everything shut down and stopped so that the responders can have clear access to what they need, so they can do their job. Our job then is really to keep everything calm, to facilitate any kind of coordination or communication or whatever we can do to support that effort.\"

Controllers also start alerting incoming planes, directing them to alternate airports and advising pilots how long they expect the airport to be closed. \"It's all about safety,\" Buckner said.

Overall, air traffic control at Oshkosh is a wonder of coordination, cooperation and collaboration that turns a tiny airfield into one of the busiest aviation locations in the world.