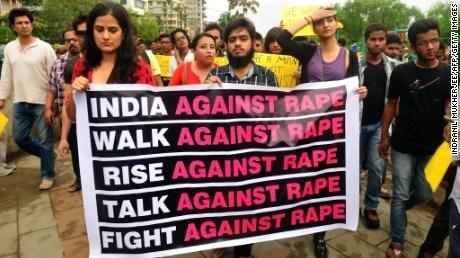 (CNN) A gang of robbers struck a Christian school in eastern India on Saturday, and one of them raped a 70-year-old nun, a senior official said.

The man apparently did so, because she resisted the robbers, said P.B. Salim, chief administrator of the West Bengal state's Nadia district.

Previously, a church official had told CNN sister broadcaster CNN-IBN that three or four of the men had raped the woman.

A group of seven to eight men allegedly barged into the school and its attached staff residence during pre-dawn hours, and the elderly Sister Superior raised an alarm and resisted, Salim said. The rape was apparently punishment for it.

Later, the men tied her up along with two other nuns and the building guard. The robbers then made off with cash worth a few hundred thousand rupees (thousands of dollars), laptops and other articles, Salim said.

The attacked nun is under medical care. \"Physically, she is better. But the mental trauma will take its own time to heal,\" Salim said.

\"It is a very, very shameful act, first of all, to rape any woman, any female,\" Father Dominic Emmanuel of the Delhi Catholic Archdiocese said in televised comments. \"But this one becomes even worse because, first of all, she is an old lady and then on top of it, she is a nun. She is a religious [and] has consecrated her life to God and all her life she has remained a virgin.\"

A series of rape cases involving girls, foreign tourists and a physiology student who died following a brutal gang rape in 2012 has hurt India's international reputation. Crowds have taken to Indian streets to protest against rape.

The nation's lawmakers introduced tougher laws and punishments for sexual crimes and harassment. Despite such action, India continues to see episodes of sexual violence.

The incident that grabbed the world's attention was the rape of a woman by five men on a bus in 2012. She later died of her injuries.

Anti-rape activists complained when the Indian government restricted the showing of a BBC documentary about rape that included comments from one of those men. He provoked outrage around the world by blaming the victim and saying the woman \"should just be silent and allow the rape.\"

Official data in India show that rape cases have jumped almost 875% over the past 40 years -- from 2,487 in 1971 to 24,206 in 2011. But campaigners say sexual assaults are underreported because of stigma and cultural factors.

Experts say the causes of the high number of rapes include the nation's patriarchy, widespread poverty and lack of law enforcement in rural areas.