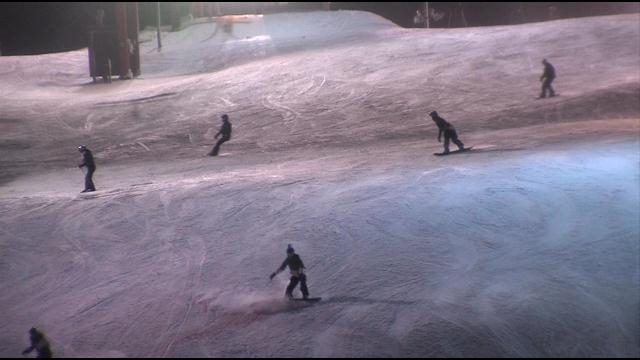 The calendar says it's January, but if you look outside your window, you might be fooled.

We haven't seen a lot of snow in Southeastern Wisconsin in quite a while, and while that's a good thing for some of us, many others have quite a different view.

On Thursday night, business appeared to be steady at the Wilmot Ski Resort.

\"I actually drove two hours just for this\", said skier Will Ramirez.

But employees at the resort say the warmer temperatures and humidity lately has been kind of a damper.

“People see the temperature is 28 degrees, and think we should be blowing snow, but in fact it sometimes has to do with the humidity”, said Lee Eddy who works at the Wilmot Ski Resort. “Cold weather with humidity makes it hard to blow snow. Cold weather with low humidity is the best circumstance.\"

\"It's taken away opportunities for me to come out to snow board, and participate in other activities”, said Will Ramirez. “It's very limiting this year.\"

In Racine, the city is gearing up for the big chill next weekend at monument square.

All the snow last year made it easy to prepare.

\"We were able to gather our snow from Racine county airport, and trucking it in”, said Vicki Hastings with the Downtown Racine Corporation.

The event roughly costs $5,000 to put together, but thanks to local businesses donating supplies, money won't be a factor.

\"We're going to be making snow”, said Vicki Hastings. “Starting this weekend, probably after Saturday looking at the forecast.”

At the Wilmot resort, snow lovers are just happy to see the white stuff again.

\"I wish there was a happy median”, said Will Ramirez. “Last year was a little too extreme.\"

A milder winter can also be expensive.