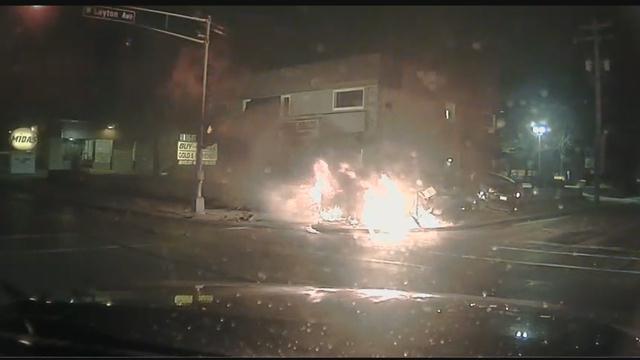 The dash camera inside a Hales Corners officer's squad car, shows his emergency lights are on, as he tries to stop a driver for speeding early Wednesday morning.

"Getting off onto Layton now," he radios. "Vehicle is not stopping."

The video shows the car slowing down to make a U-turn on Layton Avenue. The police squad is not far behind when the suspect puts on his brakes again, to make another U-turn.

"Contact Greenfield if you could," the officer asked dispatch. "It's a black Chevy Malibu."

The driver of the Malibu then makes a dangerous choice to drive the wrong way on Layton. The officer is right behind him and is also going the wrong way at a high rate of speed.

As both fly by cars, the 20-year-old suspect approaches an intersection. He blows through the red light, slamming into another car at 76th and Layton.

Seconds later, the car catches on fire and the officer radios for help.

"Contact FD, the vehicle started on fire," he said.

The suspect gets out of the burning car and tries to run, but the officer chases him and orders him to get on the ground.

"I'll help you up," the officer said. "Turn over, turn over. Put your hands behind your back."

The officer lets dispatch know the suspect is in custody.

Two people in the other car are hurt too as the flames spread, threatening a nearby jewelry store. Bret Eulberg is the president of Robert Haack Diamonds.

"If it was not for that retaining wall that was there, I believe the cars would've crashed into the building," said Eulberg.

The officer's dash cam captures two explosions before firefighters can put out the flames. Eulberg said the crash's impact knocked out a light pole, retaining wall and fire hydrant.

"I'm just amazed no one got killed," he said.

Two men in the other car were removed by the Hales Corners officer, before rescue crews got there.

They were treated for injuries at the hospital. The suspect was too, then taken to jail. Charges are expected to be filed against him in the coming days.