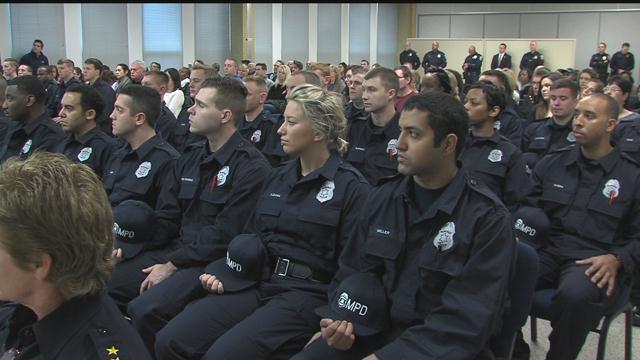 38 men and 4 women were sworn in at the Milwaukee Police Department Monday.

They range in ages from 21 to 52 and will undergo extensive training and are scheduled to graduate and hit the streets as officers in May.

CBS 58 News caught up with recruit Nouleng Her as he received a big hug and kiss from his young son.

He says the support of his wife has been vital  to fulfilling his dream.

He's spent time as a Corrections Officer, always hoping to clear initial training and put him on the path to become a police officer.

"When I was younger there wasn't that many Hmong officers," explained Her. "So, there wasn't many people I could relate to in law enforcement."

We met another recruit, Dustin Constino, who  has been studying criminal justice at UW Milwaukee.

He wants to take what he's learned to the streets, knowing his family is behind him and will continue to support him in pursuit of a dangerous and challenging career.

"This is where I'm from and the community I'm looking forward to serve," Constino told CBS 58 News.

For as intense this initial training has been to get to this point, this recruit class was warned from Chief Ed Flynn that the next 24 weeks will be like nothing they can anticipate.

"If you think it's hard here when somebody here is yelling at you," began Chief Flynn. "Just think how it is when everybody's yelling and you're in a crisis and somebody's injured and you're trying to figure out what's going on. So you can begin to take the appropriate steps. The training here has a purpose. The stress here has a purpose. The ultimate purpose is to groom people worthy of this profession."

The swearing in ceremony and time to visit and pose for pictures with family was just a momentary rest.

Many of these recruits were back at classroom instruction by the afternoon, telling us they truly felt that their family, now including their brothers and sisters in blue, had their back.